Joust is an action game originally released in arcades by Williams Electronics in 1982. It was later ported to numerous home computers and game consoles. The game has a platform based view where players are riding an osterich and need to defeat numerous, buzzard riding enemy knights. The game allows two players to play at the same time in either a cooporative or competive manner (which could possibly change as the game progresses). Joust is the first time an arcade game offered the choice of cooporative or competive play. 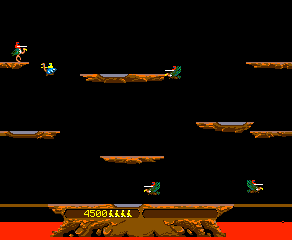 Arcade version of Joust
In Joust either one or two players control a knight riding an osterich; players can walk and run as well as fly by repeatedly flapping the osterich's wings. The goal is to defeat all of the enemy buzzards on each level. To defeat a buzzard, players will need to joust with it. Both the players and buzzard riders carry lances; when a player collides with a buzzard rider, whoever has their lance higher wins and the opponent is destroyed. If both lances are at equal heights, the joust is a draw and both the player and buzzard rider survive. When a buzzard rider is defeated, an egg is left behind. If the player collects the egg quick enough, bonus points are earned. If the egg is left alone, it will eventually hatch into a new buzzard rider. Once all of the buzzard riders on a wave are destroyed, the game continues to the next, more difficult wave.

There are three different types of buzzard riders in the game which are indicated by different colors. Bounders, which are red, are the easiest opponents of the three. The Hunters, wearing grey, are of middle difficulty and are faster than Bounders. The Shadow Lords, wearing blue, are the most difficult opponents and are faster and more aggressive than other buzzard riders.

In addition to the buzzard riders, there are several other dangers to players. At the bottom of the screen there are lava pits to the left and right sides. On the first two levels, the lava is covered by a bridge so the player is safe. Afterwards the bridge is removed allowing both players and the buzzard riders to fall in if they aren't careful. Within the lava there is a lava troll, and if a player flies too close a hand reaches out and attempts to pull the player or buzzard rider into the lava. As the game progresses, the lava trolls reach becomes longer and its grip becomes stronger making it tougher to escape if caught. The final danger is the deadly pterodactyl. The pterodactyl appears if players take too long to complete a level. The pterodactyl can be destroyed, however it is very difficult; it must be hit with the lance directly on its beak while it is closed. In most versions of the game this requires pixel exact accuracy.

Each wave consists of multiple platforms on the screen; as the waves progress, some platforms are removed making for several layout variations that could affect the players strategy or wave difficulty. In addition, certain waves have unique goals and may award bonus points. The special waves encountered are:

Product catalogs, magazines, flyers, or other documentation Joust has appeared in.
*Note: If you are unable to see any images in this section, you may have an ad blocker installed that is blocking the thumbnails and/or images.