Joust 2: Survival of the Fittest 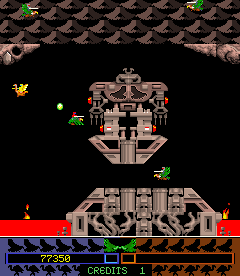 Joust 2: Survival of the Fittest is an arcade game released in 1986 by Williams Electronics, Inc. It is the sequel to Joust and features gameplay reminiscent of the original while adding a number of new features along with improved graphics and sound. Joust 2 was not as successful as the original Joust making the arcade cabinets comparatively rare and the game wasn't ported to any consoles or home computers at the time.

In Joust 2: Survival of the Fittest players control a knight; the goal is to eliminate all opponents on the screen in order to move on to the next, more difficult level (refererred to as a wave in the game). As in the original Joust, when the knight collides with any of the opponents whomever has the higher lance wins and the opponent is eliminated (in the event both lances are of equal height, the fight is a draw and the two knights simply bounce off of each other). While in Joust players were riding an ostrich, in Joust 2 players can transform between riding a Pegasus horse or an ostrich. The ostrich reacts as in the previous game; the horse, in comparison, is much larger and doesn't fly as well. It can, however, perform better in ground battles and has better defensive ability.

The level designs in Joust 2 are more ellaborate and varied than in the original game. The game uses a vertically oriented monitor instead of horizontally oriented as in the original making the layout for each wave taller. Each wave features different background graphics and a different arrangement of platforms. On some waves, players have an additional goal such as hitting all targets with their lance before the wave can be completed.

Similar to its predecessor, Joust 2 offers the option of two players playing simultaneously. In most waves players cooporate to defeat all opponents, however there are some waves designated as gladiator waves where bonus points are awarded to the first player to defeat the other player.