Wizardry V: Heart of the Maelstrom 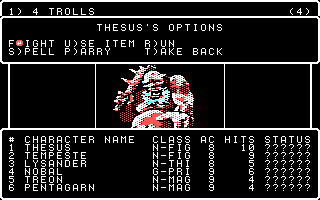 Wizardry V: Heart of the Maelstrom is an RPG published by Sir-Tech in 1988. The fifth entry in the Wizardry Series, the game returns to the style and storyline of the first three games in the series (Wizard IV was an outlier with the unusual concept of players taking on the role of the evil wizard trying to escape). The story picks up after Wizardry III; thanks to the Orb of L'Kbreth, the land of Llylgamyn has experienced many years of peace and prosperity. But nothing lasts forever, and the the powers of chaos have been unleashed again. It is up to a party of adventurers (led by the player) to explore the caverns beneath Llylgamyn (appropriately known as the Maelstrom) to find a solution to the chaos. Wizardry V features similar gameplay as previous entries in the series and expands on the concept with new abilities, new spells, new monsters, and a new set of mazes.

As the game begins, a darkness is appearing over Llylgamyn which, for an unknown reason, is unraveling the very fabric of reality. The source is identified as a magical vortex located at the heart of the caverns (known as the Maelstrom) which are located beneath Llylgamyn. The maze-like caverns are the home of myriad monsters, outcast beasts, traps, and other dangers. The sages of Llylgamyn have found only one solution to the crisis; seeking out a demi-god known as Gatekeeper. Unfortunately, Gatekeeper himself is a prisoner in the vortex that needs to be destroyed! As the player, a party of adventurers needs to be assembled in order to find a way to free Gatekeeper and destroy the vortex before all is lost.

Wizardry V continues the same gameplay style as the previous games in the series and adds a few additions and variations. The player has the usual first person view of the underground caverns created with simple wireframe graphics; the graphics have also been enhanced slightly as the illustrations for monsters and other characters are now larger and more detailed. The caverns are a complicated maze that players will need to carefully map their way through; for the first time in the series, the maze is not constrained to a 20x20 grid and instead each level is a different size and shape. Also a first for the series, players may encounter some characters in the caverns that are friendly and can be interacted with (and this is sometimes necessary in order to acquire items). When an unfriendly opponent is encountered, the battles use a turn based system common to the Wizardry games. There are some new spells available and a new range rating for weapons allowing for some attacks from the back row of the party formation. Thieves and ninjas can also hide in the shadows now in order to ambush opponents. The amount of puzzle elements has been increased; In order to complete the game, Wizardry V features 30 different items players will eventually need to acquire, far more than in the previous games. Players are able to import their characters from previous games, however this is not required.

Product catalogs, magazines, flyers, or other documentation Wizardry V: Heart of the Maelstrom has appeared in.
*Note: If you are unable to see any images in this section, you may have an ad blocker installed that is blocking the thumbnails and/or images.