Wizardry: Bane of the Cosmic Forge 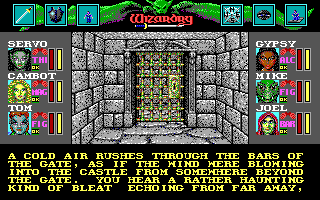 IBM EGA version of Bane of the Cosmic Forge

Wizardry: Bane of the Cosmic Forge is the sixth game in the Wizardry Series. First released by Sir-Tech in 1990 for the Amiga and IBM PC, versions for other platforms followed including the Macintosh, FM Towns, PC-98, SNES, and more. Like it's predecessors, the game is an RPG where players assemble a party of up to six adventurers in order to survive through a series of monster infested, maze-like dungeons. For the first time in the series, Bane of the Cosmic Forge features a significant upgrade to the game engine with new full color dungeons, digitized sound, a mouse-driven interface, and more.

The cosmic forge is a magical pen with great powers; its origin is unknown, and whatever is written with the pen will be woven into the fabric of reality and become real. A king and a wizard somehow managed to acquire the pen and they used it to write unspeakable horrors. Fortunately, they soon became jealous of each other and didn't want to share power; following the ensuing battle, both the king and wizard disappeared leaving their castle empty. The game begins over one hundred years later and no one knows what happened to either of them or the pen. The player, along with their party of adventurers, locates the castle and enters. The door of the castle locks, leaving no choice but to explore, locate the pen, and solve the mystery of what happened long ago.

Gameplay in Bane of the Cosmic Forge continues the Wizardry tradition and features a first person view of the dungeons and landscapes combined with a turn-based combat system. The simple wireframe graphics have now been replaced with a more detailed, full color representation of the dungeons and character illustrations are more detailed. Players start by builder their party of up to six adventurers; 11 different races can be selected from each of which have unique strengths and weakneses along with 14 different professions. A variety of combat and magic skills are also available for characters to learn. As the character creation process and character abilities are more extensive than previous Wizardry games, Bane of the Cosmic Forge is one of the few games in the series which does not offer the ability to import characters created in one of the previous games. When unfriendly monsters are encountered, the combat system is turn based. Players can select from a variety of physical attacks, magic, or defensive options. The dungeons are maze-like; unlike early Wizardry games, the size and shape of each dungeon is varied and not constrained to a 20x20 grid. There are numerous traps that will be encountered and other puzzles to solve along the way.

Similar to Wizardry V, players will again encounter a number of friendly characters throughout their quest; it's possible to have conversations with these NPC's and the feature has been expanded allowing more detailed conversations about various topics. The game also features a branching storyline; depending on whether or not players decide they will trust one of the main characters encountered, the story varies slightly with one of three different endings possible.

Product catalogs, magazines, flyers, or other documentation Wizardry: Bane of the Cosmic Forge has appeared in.
*Note: If you are unable to see any images in this section, you may have an ad blocker installed that is blocking the thumbnails and/or images.