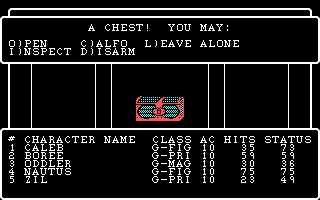 Wizardry: Knight of Diamonds - The Second Scenario is the second game in the Wizardry Series and the sequel to Wizardry: Proving Grounds of the Mad Overlord. Like it's predecessor, the game is a Dungeons & Dragons inspired dungeon crawl RPG; gameplay remains almost exactly the same with players guiding a party of up to six characters through a new six level dungeon.

As the game begins, the city of Llylgamyn is under siege by the evil knight Davalpus; the royal family has been killed, and Davalpus has declared himself dictator of the region. To restore the city, the legendary Staff of Gnilda and the armor of the Knight of Diamonds will be needed to defeat all of the invaders. These items aren't easy to obtain; the god Gnilda has hidden the staff within a six level dungeon; additionally, the armor is split into six parts with one part on each level. Players will need to locate all of the items and obtain the blessing of Gnilda in order to succeed!

Similar to the first scenario, Knight of Diamonds uses simple wireframe graphics to present players with a first person view of the dungeon. The maze-like dungeon is layed out across a 20x20 grid and consists of numerous traps, doors (both in plain view and hidden), monsters, and other obstacles. Each of the six levels in the dungeon contains a part of the Knight's armor hidden somewhere, and players will need to carefully map their way through the complex mazes to find them all. Each level is connected by stairs; unlike the first scenario, there is no way to skip levels. Players are able to teleport, however this isn't possible for levels that haven't yet been reached by finding the stairs.

During an encounter with monsters, the dungeon view is replaced by pictures of the monsters for the duration of the battle. Battles are turn based; on each round players select an action for each active character in the party, then the battle plays out and the results for the turn are shown. Battles can be randomly encountered while others always occur at a predetermined location. The frequency of the random battles may vary as well making some areas of the dungeon more difficult. Depending on a character's class and abilities, different actions are available which can include fighting (if a character is in the front row), casting various spells (both offensive and defensive), parry, use of an item, running from a fight, and more. Monsters encountered come in a wide variety of shapes, sizes, and with different strengths and weaknesses. As monsters are defeated, surviving party members earn experience which increases their stats.

Knight of Diamonds was intended to be played by players who successfully completed the first game. As such, initial versions of of the game did not provide a means to create a new party; instead, you had to have created a party with Wizardry: Proving Grounds of the Mad Overlord which could be imported. Later releases removed this requirement and added an included pre-generated party and the ability to create new characters. The game difficulty was designed around the assumption players would have characters of at least level 13 and there was also no training area included as in the first game.