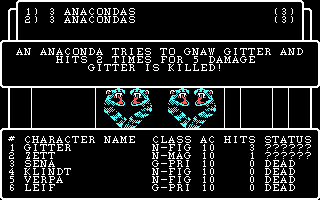 Wizardry: Legacy of Llylgamyn - The Third Scenario is a dungeon crawl RPG first released by Sir-Tech in 1983. It is the third game in the Wizardry Series and features similar gameplay as its predecessors. In this scenario, a party of up to six characters explore a new six level dungeon in an effort to save the City of Llylgamyn from the forces of nature itself.

The City of Llylgamyn is again being threatened, this time by the forces of nature in the form of volcanos, earthquakes, weather, tidal waves, and more. The sages of Llylgamyn know of a mystical orb guarded by the Great Dragon L'kbreth which they believe will allow the cause of the disasters to be determined and then hopefully stopped. Players are tasked with the mission of retrieving the mystical orb by guiding a party of up to six adventurers at a time through the six level dungeon located inside a volcano.

As in the previous Wizardry games, Legacy of Llylgamyn utilizes a first person view with simple wireframe graphics to represent the dungeon. Each of the maze-like floors of the dungeon are layed out on a 20x20 grid with numerous doors, traps, monsters, and other challenges. When monsters are encountered, the battles are turn based; for each character in the party, players can choose an action (cast spells, attack, defend, use items, etc.) and the results of that round are shown. Opponents have different strengths and weaknesses, so players may need to devise a strategy for defeating them. Experience points are awarded for characters surviving at the end of a battle allowing them to level up their skills and strength.

Characters in Legacy of Llylgamyn need to be imported from one of the first two scenarios. As the timeline for this scenario takes place long after Knight of Diamonds, the resulting characters are actually the descendants of those that are imported; some characteristics such as name and class are maintained, however the experience level is reset to level 1, learned spells are lost, items are lost, and it is possible to change the character's alignment from the one imported. While the concept of character alignment existed in the previous games (characters can be evil, neutral, or good), it takes on a more significant role in the third scenario. Some levels in the dungeon have requirements for what type of characters must be in the party: the second and fourth levels can only be accessed by parties with at least one good character, the third and fifth levels by parties with at least one evil character, and the sixth and final level required at least one good or one evil character (no purely neutral parties). This effectively made it necessary for players to build up more than six characters in order to complete the game.