Space Quest V: The Next Mutation 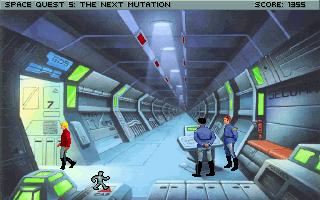 IBM VGA version of Space Quest V
Space Quest V: The Next Mutation is a 3D animated adventure game published by Sierra On-Line in 1993. It is the fifth game in the Space Quest series and the first one to be developed by Dynamix rather than Sierra. It is also the first game in the series not designed by both Mark Crowe and Scott Murphy, aka "Two Guys from Andromeda", with only Mark Crowe having worked on the game. Like previous entries in the series, Space Quest V is a sci-fi comedy and this time around heavily spoofs Star Trek. The story picks up where Space Quest IV left off and finds Roger Wilco back at the StarCon Academy attempting to attain the rank of captain.

After having travelled through time in Space Quest IV and learned of his future wife, Roger Wilco has returned to the StarCon Academy. He is, however, not doing particularly well, but is able to pass his exams by cheating. Having finally "passed" the exams, Roger is made captain of a garbage scow and even has his own crew. Now Roger will have to complete a number of Star Trek inspired missions; in the process, he uncovers a plot involving a mutagenic substance that is threatening the galaxy by tranforming people into dangerous mutants. Along the way Roger finds his future wife's mother; it becomes imperative that he protect her, otherwise his son won't be born and Roger won't exist (his son having saved him in Space Quest IV).

Space Quest V uses a point-and-click interface similar to the one used by Space Quest IV as well as other Sierra adventure games at the time. No typing is required as with earlier Sierra adventures, instead players use a series of icons which can be clicked on objects to perform actions. Icons include a walking man for having Roger move around, a hand to pick up items or perform actions, an eye to look at things, dialog boxes for talking or issuing commands, and unique icons for different inventory items.

Space Quest V was developed with Sierra's SCI (Sierra Creative Interpreter) game engine. Unlike Space Quest IV, there was only a single release containing both 256 color VGA and 16 color EGA graphics instead of each version having seperate releases. Additionally, a CD-ROM version with voiceovers was not released for Space Quest V even though there had been one for Space Quest IV. This is due to financial troubles Dynamix was having at the time and they felt that releasing new games instead of enhanced versions of games already released was a better use of their resources. The game is also the second by Sierra to have advertising in it (Leisure Suit Larry 5 was the first); The logo for Sprint appears throughout the game and in the ending credits.

This game has been tagged with the following features:
Sierra Creative Interpreter