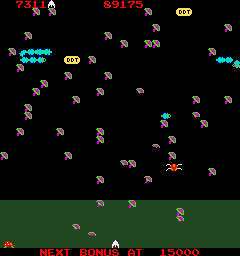 Arcade version of Millipede
Millipede is an action game originally released in arcades by Atari in 1982 and later ported to several home systems including the Atari 2600 and Atari 8-bit computers. It is the sequel to Centipede and has similar gameplay while adding some new features. As in Centipede, the goal of the game is to earn as many points as possible by shooting the numerous attacking insects.

Gameplay in Millipede takes place in a forest of randomly placed mushrooms. Players control an archer which can move anywhere near the bottom of the screen which is capable of firing shots to destroy opponents and obstacles. As each level in the game begins, the titular millipede appears in the top center of the screen and makes its way towards the bottom. The millipede travels either left or right until it hits and obstacle or the edge of the screen; it will then reverse direction and drop down a row. The millipede consists of multiple segments, most parts form the body which is lead by a head segment. Each time a segment is shot, it will turn into a mushroom and the remainder of the millipede continues on; if a body segment is shot, a new head is formed and two millipedes are formed. The level ends when all millipede segments are destroyed and the game then repeats with a higher level of difficulty. In addition to the millipede, numerous other insects appear as well, most of them deadly but a few also provide bonuses. Anytime the player's archer is hit by an insect a life is lost, and the game ends when there are no more lives in reserve.

Millipede features many new insects and other obstacles; the opponents encountered are the following:

Points are earned for shooting the various insects and obstacles as follows: In the 12 level sequence there are 5 insect raids that occur; during a raid there's no millipede but numerous insects appear very rapidly (only bees, dragonflies, and mosquitos will appear either by themselves or in some combination). Raids can be useful to earn lots of points, or even clear portions of the screen of mushrooms. During a raid each insect shot is worth 100 points more than the previous one, up to a maximum of 1000.

Any insects killed by a DDT explosion are worth three times their usual value (except spiders which are worth 1,800). Insects during a raid retain their original value even when destroyed by DDT.

Bonus lives are awarded for reaching certain point thresholds; the number of points needed can vary depending on the game settings or difficulty level selected.

Product catalogs, magazines, flyers, or other documentation Millipede has appeared in.
*Note: If you are unable to see any images in this section, you may have an ad blocker installed that is blocking the thumbnails and/or images.

This game has releases with the following standardized packaging styles:
Atari 8-bit (Silver)