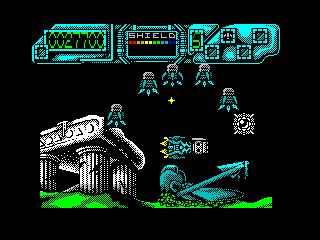 Darius+ is the home computer and game console version of the arcade game Darius. Gameplay remains overall the same as its arcade counterpart, however it has been modified to work within the hardware constraints of the home systems. Most notably the game's graphics and levels have been revised to work with a single screen instead of the three screens used by the arcade version and only one player at a time is supported instead of two players.

Like the arcade game Darius+ is a side scrolling shooter; controlling the Silver Hawk class ship, players need to survive through 7 zones each heavily guarded by enemy spacecraft, ground fighters, missiles, and other obstacles. The Silver Hawk is equipped with two main types of weapons; forward firing shots and missiles which are aimed towards the top and/or bottom of the screen. Weapons upgrades can be found after shooting certain enemies in the form of colored spheres; Red spheres upgrade the Silver Hawk's forward firing capability, Green spheres upgrade bombing capability, and blue spheres increase shield power. Players also need to avoid the walls in each zone; while some zones are mostly open providing lots of space to maneuver in, others have very narrow passages. Contact with any of the cave walls will instantly destroy the Silver Hawk (even with shields present).

Darius+ includes 28 different zones with a large battleship at the end of each zone. When a zone is completed, players can select one of two zones to proceed to next. To complete the game, a path of only 7 zones needs to be completed so to see all 28 players will need to play the game multiple times and select a different path.