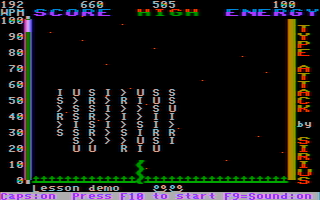 Points in the game are earned for the number of words per minute typed and accuracy; a high score table is included to save the player's best results.

Product catalogs, magazines, flyers, or other documentation Type Attack has appeared in.
*Note: If you are unable to see any images in this section, you may have an ad blocker installed that is blocking the thumbnails and/or images.