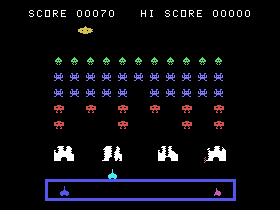 TI Invaders is a clone of Space Invaders released for the TI-99/4 and TI-99/4A in 1981. The gameplay remains essentially the same with players attempting to defend Earth from rows of invading aliens.

Gameplay in TI Invaders is the same as in Space Invaders. Players control a canon which can move horizontally along the bottom of the screen; starting at the top of the screen are five rows of alien invaders which slowly make their way towards the ground. The aliens move horizontally and each time they reach the end of the screen drop down a level; if they reach the ground, the game is over. Players need to shoot all aliens to earn points; when all aliens are destroyed, the game moves on to the next level. The aliens begin slowly, and as more are destroyed the faster they move; additionally, they constantly drop bombs. If a player is hit by a bomb, the canon is lost. There are four shields located just above the player's canon; the shields block both player and alien fire. Each time the shield is hit, a small part is destroyed (eventually, if enough shield is eliminated it will fail to provide protection). From time to time, a flying saucer will appear overhead and move across the screen horizontally; the saucer earns bonus points if shot and doesn't attack the player. The game ends if players lose all of their canons or if the aliens land.