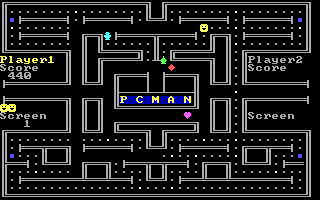 PC Man for the IBM PC
PC Man, not to be confused with the Orion Software game with nearly the same name, is a clone of the arcade game Pac-Man released for the IBM PC in 1982. Using ASCII characters for graphics, the game remains very similar to Pac-Man.

Players control PC Man (represented by the smiley face character); the goal is to guide PC-Man through a maze and collect all of the dots. There are four opponents constantly in pursuit of PC Man (similar to Pac-Man, they're referred to as ghosts but represented with four different ASCII characters and different colors); PC Man must avoid them, or a life is lost. In each corner of the maze is an energizer; after collecting the energizer, the ghosts are temporarily vulnerable and PC Man can eat them for bonus points. After a ghost is eaten it will return to the center of the screen and resume pursuit shortly. Once all of the dots in a maze are cleared, the level is complete and players continue to the next, more difficult level. The game ends when players lose all of their lives.

PC Man includes several difficulty settings allowing players to select 2, 3, or 4 opponents, have energizers that wear off slowly or quickly, and have a slow or fast game speed. Points are earned for eating dots, eating the ghosts, eating the occasional bonus item that appears in the middle of the maze, and for clearing a maze.