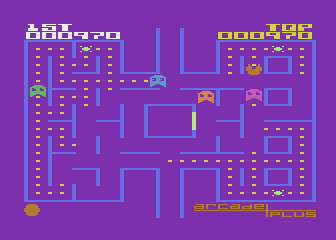 Ghost Hunter is a clone of the game Pac-Man released in 1981 for Atari 8-bit computers. The game has players in the haunted mansion on Huckleberry Hill with the goal of eating all of the dots in the maze without being caught by the ghosts!

Like Pac-Man, Ghost Hunter has the player in a maze filled with dots; to complete each level, all of the dots need to be eaten. There are four ghosts in constant pursuit; being caught by a ghost will cost the player a life, and the game ends when players have no lives remaining. Ordinarily, there is no defense against the ghosts and they simply need to be avoided; each maze, however, has four power pellets. If the player eats one of these, the ghosts are temporarily vulnerable and can also be eaten. The ghosts don't disappear forever, and reappear in the middle of the screen again to resume their pursuit. Aside from a different maze, Ghost Hunter also has a few other features to differentiate it from Pac-Man. From time to time, a small part of the player's character will appear in the maze: if all 6 parts are found and eaten, an extra life is awarded. Players also have an “Instant-Hide” feature; this causes the player to disappear from view for up to 5 seconds allowing the ghosts to be evaded. Multiple mazes (referred to as floor plans) are included with 15 default layouts able to be selected and the option to have the computer randomly generate the maze. Lastly, a 2 player head-to-head option is available allowing both players to compete for dots in the maze at the same time.

Product catalogs, magazines, flyers, or other documentation Ghost Hunter has appeared in.
*Note: If you are unable to see any images in this section, you may have an ad blocker installed that is blocking the thumbnails and/or images.