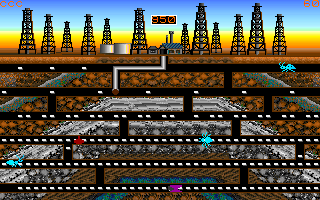 IBM VGA version of Oil's Well
Oil's Well is an action game published by Sierra On-Line in 1990 for IBM and compatible computers. It is a remake of their earlier 1983 game, also called Oil's Well. The updated version recreates the gameplay of the original while adding enhanced graphics and sound along with new animated cartoons between each level featuring Slater, a dinosaur that is frequently inconvienced by a drillbit. As in the original game, the goal is to collect all of the oil found in a maze before time runs out. The game is similar to the arcade game Anteater which came out in 1982.

The game screen in Oil's Well consists of a maze filled with oil (dots). At the top center of the screen is the player's oil rig; from here a drill bit trailed by a connecting pipe can be navigated through the maze to collect oil. The goal on each level is to collect all of the oil before time runs out. The drill bit can only move forward and it cannot cross over the pipe; players have the ability to rapidly retract the pipe which can be used both for navigating to different parts of the maze and avoiding dangers.

To help out players, each level contains a bonus 'Petromin' which appears as a larger dot; if this is collected, all of the critters and other moving items on the screen except for the drill bit will temporarily slow down greatly allowing the player to more easily collect oil.

Oil's Well includes eight different mazes each of which increase in complexity. As the game progresses the number of critters and their speed increase as well. Three difficulty levels (labeled as Regular, Unleaded, and Premium) are available. The gameplay in this updated release is very similar to the original version and the level design remains nearly identical as well. The update includes enhanced graphics with support for (at the time) modern display hardware including 256 color VGA graphics and a new stereo soundtrack with support for common sound cards. 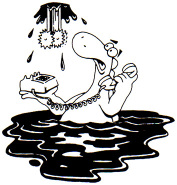 Product catalogs, magazines, flyers, or other documentation Oil's Well has appeared in.
*Note: If you are unable to see any images in this section, you may have an ad blocker installed that is blocking the thumbnails and/or images.

This game has been tagged with the following features:
Customizable CGA Palette