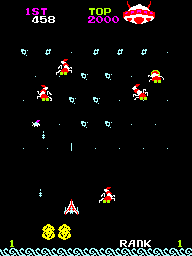 Magical Spot is an arcade game released by Universal in 1980. The game is a shooter similar in concept to Galaxian where players need to destroy numerous waves of invaders to try to earn as many points as possible.

Players control a laser ship which can move horizontally along the bottom of the screen. Along the very top of the screen a UFO moves back and forth and releases enemy grubs. The grubs slowly make their way down the screen attempting to reach a hole at the bottom (beneath the player's ship). To stop a grub, players need to shoot it twice; after the first shot, the color changes and then a second shot will destroy it. If the grub does make it past the player's ship, it forms a cocoon; after 7 cocoons have formed, they all hatch into ultramoths. The ultramoths not only move very rapidly, but fire extremely fast shots directly at the player that can be difficult to dodge. If player's survive the ultramoth stage, the game returns to the initial screen with another UFO releasing more grubs. Players begin the game with a limited number of laser ships; additional ships are awarded after crossing certain point thresholds, and the game ends when no more ships remain.

Product catalogs, magazines, flyers, or other documentation Magical Spot has appeared in.
*Note: If you are unable to see any images in this section, you may have an ad blocker installed that is blocking the thumbnails and/or images.