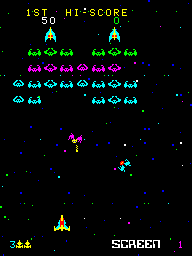 Cosmic Alien is an action game released in arcades by Universal in 1980. It is a space shooter with similarities to Space Invaders and Galaxian; in the game players control a spaceship and need to shoot the varied attacking aliens to earn as many points as possible.

Players control a spaceship at the bottom of the screen which is limited to left and right movement and can fire one shot at at time. At the top of the screen is a fleet of multi-colored aliens; players need to shoot all of the aliens in order to proceed to the next, more difficult level. The aliens attack by firing missiles at the player or by attempting to crash into the player's ship. As the game progresses, the player's ship will also be moved closer to the aliens allowing for less time to react to attacks and also allows the aliens to attack from behind. Players begin the game with a limited number of space ships, and the game ends when all reserve ships have been destroyed. Additional ships can also be awarded for crossing certain point thresholds; the number of ships a player begins with and/or the amount of points required for a bonus ship can depend on the game configuration.