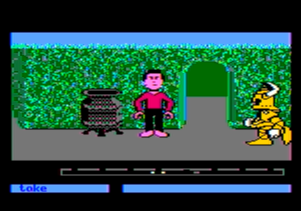 Labyrinth: The Computer Game is an action/adventure game first released by Activision, Inc. in 1986. The game is the first adventure developed by Lucasfilm Games and loosely follows the setting and story of the movie Labyrinth. In the game players find themselves in the titular labyrinth with only 13 hours to reach the center and defeat Jareth or they’ll be trapped forever!

Labyrinth: The Computer Game begins as a text-only style adventure game. While exploring players will eventually find their way to a movie theater where the film Labyrinth is showing. As the movie begins, the game’s graphics appear for the first time along with Jareth, the goblin king, informing players that they have a short 13 hours (in real-time) to solve the labyrinth. Players are then transported to the labyrinth and the adventure begins! While the game doesn’t follow the plot of the movie precisely, many events, locations, and characters (including Ludo, Hoggle, the Fireys, and more) make an appearance in the game. Some puzzles are also inspired by the movie but with a different solution.

Once past the introduction, the game uses a side view as players explore the labyrinth; as players move, the screen scrolls horizontally to follow them while a radar type view at the bottom of the screen shows the entire room along with the location of the player, items, and other characters. Players can also move forward through doors or on paths that will lead to the next side scrolling room. Guards and other opponents are found throughout the labyrinth; if caught, players are dropped into an oubliette and will need to figure out how to escape in order to get back on the path. In both the text-only introduction and throughout the graphical part of the game commands are performed using a series of menus instead of via a text parser; there are two columns, each with a series of actions or names that can be scrolled through. By building appropriate two word commands players can use items, talk to characters, and more in order to solve the puzzles throughout the game. The lack of a parser was unusual for adventure games of the era and Labyrinth is Lucasfilm Games first attempt at a non-typing interface, an idea which they would refine even further in Maniac Mansion and subsequent games. Although Labyrinth is not an action game overall, gameplay is in real time so players can't take too long solving puzzles and there are some mini action sequences. Gameplay can be saved for players to return to later.