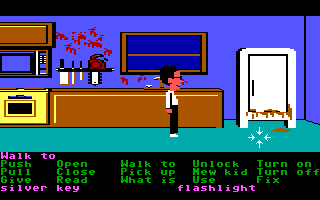 IBM EGA/VGA version of Maniac Mansion
Maniac Mansion is an adventure game first released in 1987 by Lucasfilm Games. In the game the player controls Dave Miller and two of his friends (which can be selected from a total of six) with the goal of rescuing Dave's girlfriend from a mad scientist. Gameplay is nonlinear, and the solution to some of the puzzles will depend on which characters the player has selected. Unusual for the time, the game utilized a point-and-click interface instead of typed commands to make gameplay easier and less frustrating. A sequel, called Day of the Tentacle, was released in 1993. Maniac Mansion was the first game developed by Lucasfilm Games that they also published themselves.

Sandy, Dave's girlfriend, has been kidnapped and is being held hostage in a mysterious mansion! Dave, along with two of his friends (which are selected by the player), need to break in to the mansion and rescue her. The house belongs to Dr. Fred, who is a retired physician turned mad scientist. A mysterious meteor is controlling his mind, causing him to become evil and attempt to take over the world for the meteor. Throughout the game there are short cut-scenes which show players what is going on in other parts of the mansion; these scenes can provide clues, advance the story, or warn when one of the mansion's inhabitants is approaching.

Maniac Mansion uses a point-and-click interface to interact with the game. Along the bottom of the screens are a series of actions along with the player's inventory. By clicking on verbs, objects, locations, or inventory items, a sentence can be constructed which causes the selected character to perform the action.

Aside from the point-and-click interface, Maniac Mansion also set itself apart from other adventure games of the era by making it difficult for characters to be killed or become stuck in an unwinnable situation. While both were possible, it wasn't very common and usually required deliberate and obvious actions by the player. This contrasts with many adventures, such as those by Sierra On-Line, where characters could die unpredictably by picking up a dangerous item or falling over the edge of the scenery. Included in the available actions is a 'What is' action; this allows players to determine what objects on the screen are without having to guess (due to the limited graphics resolution, small objects could be difficult to discern). Lucasfilm Games would continue to use these design philosphies in their following adventure games. 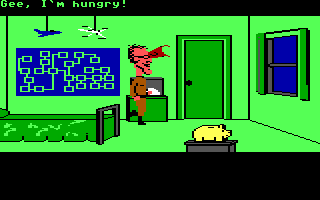 A cutscene showing Weird Ed
Maniac Mansion features numerous characters, some playable and others computer controlled. During the game the player controls three characters; Dave is always a selected character, and the player can choose any two of the remaining playable characters. Each character has a different personality and skills which can have an impact on the game. Based on the characters chosen, the solution to certain puzzles can vary or some puzzles may not be solvable at all and the player will need to find a different route to the end.

Product catalogs, magazines, flyers, or other documentation Maniac Mansion has appeared in.
*Note: If you are unable to see any images in this section, you may have an ad blocker installed that is blocking the thumbnails and/or images.