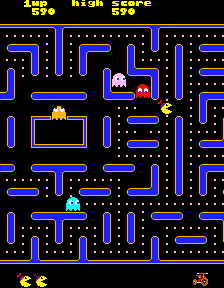 Arcade version of Jr. Pac-Man
Jr. Pac-Man is an action game originally released in arcades in 1983 and later ported to home computers and game systems. It is one of many sequels to Pac-Man and has similar gameplay while adding some new features. As in Pac-Man, the goal of the game is to eat all of the dots in a maze without being caught by the four ghosts.

Players control Jr. Pac-Man in a maze with the goal of eating all of the dots. Also in the maze are four ghosts (named Blinky, Pinky, Inky, and Tim) who are chasing the player; if the player is caught, a life is lost and the game ends when the player has no more lives remaining. In several locations in the maze are power pills; if eaten, it allows the player to chase and eat the ghosts. The mazes in Jr. Pac-Man have changed compared with the previous games; Jr. Pac-Man features seven different maze layouts compared with one in the original Pac-Man and four in Ms. Pac-Man. If a player completes all seven, the game will then continously loop through the fourth through seventh mazes. Additionally, the maze is larger than the screen so it will scroll to follow the player. Similar to in Ms. Pac-Man, from time to time a bonus item will bounce around the screen; points are earned if the player eats it before it disappears. In Jr. Pac-Man the bonus item impacts the game further; any dots it crosses will become larger, mutated dots. The larger dots are worth more points, however they slow down the player. If the bonus comes in contact with a power pellet, both will be destroyed. Like in previous Pac-Man games, there are short, animated intermissions after certain levels; in Jr. Pac-Man, there are three acts which appear after levels 1, 3, and 5 (afterwards the third act is repeated).

Points are earned as follows in Jr. Pac-Man for eating items:

Product catalogs, magazines, flyers, or other documentation Jr. Pac-Man has appeared in.
*Note: If you are unable to see any images in this section, you may have an ad blocker installed that is blocking the thumbnails and/or images.

This game has releases with the following standardized packaging styles:
Atari Red