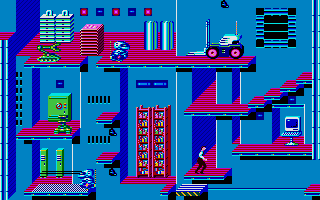 IBM MCGA/VGA version of Impossible Mission II
Impossible Mission II is an action/strategy game developed by Novotrade in 1988. It is a sequel to the 1984 game Impossible Mission; the gameplay remains very similar to the previous game while adding some new features and changes. The player controls an agent whose mission is to stop the evil Elvin Atombender, the mad scientist from the first game who intends to destroy the world. Players will need to infiltrate Elvin's heavily guarded fortress to stop him.

Following his defeat in the first Impossible Mission game, Elvin is hiding out in his fortress which consists of nine towers. To stop Elvin from destroying the world, players must infiltrate the fortress and locate the control room in the central tower to disarm missiles within 8 hours. To accomplish this, players will need to complete several tasks to break through the security in the towers; this includes: In each room in the fortress are various objects that can be searched (such as book cases, desks, furniture, and so on). While searching Elvin's fortress players will need to avoid the many deadly robots that stand guard in each room; players have an infinite number of lives, however if they are destroyed by a robot or fall off the bottom of the screen 10 minutes of time is lost. The robots come in several varieties; some types return from the original Impossible Mission and some are new. The following robots may be encountered throughout the fortress: Players are generally defenseless against the robots and must simply avoid them, however some items can be found to help out. These items include pass codes to disable all robots in a room, mines that can be left on the floor to destroy robots that cross it, and time bombs that explode destroying any nearby robots. These defenses are located by searching objects and can be saved to be used whenever the player wishes.

Product catalogs, magazines, flyers, or other documentation Impossible Mission II has appeared in.
*Note: If you are unable to see any images in this section, you may have an ad blocker installed that is blocking the thumbnails and/or images.