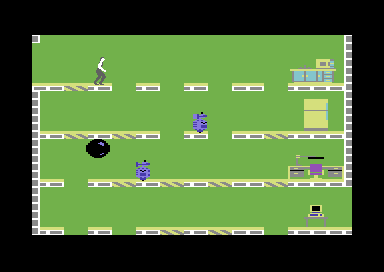 Commodore 64 version of Impossible Mission
Impossible Mission is an action/strategy game first published by Epyx for the Commodore 64 in 1984. It was later ported to other systems including the Atari 7800, Apple II, Sega Master System, Nintendo Entertainment System, and many more. In the game, Professor Elvin Atombender, an evil genius, is tampering with national security computers; players take on the role of a secret agent assigned the mission of infiltrating Atombender's fortress in order to stop him.

In Impossible Mission, players need to assemble a nine digit password in order to access Elvin Atombender's computer control room located within his fortress. There are 36 puzzle pieces needed to determine the password which are hidden throughout the fortress and after all pieces are located they need to be correctly assembled together which reveals the password. The password, location of the puzzle pieces, and the rooms in the fortress are randomized each time a new game is started.

There are 32 rooms in Impossible Mission which are connected via a series of hallways and elevators. The rooms themselves consist of various platforms (and in some cases, there are gaps in the floor which players need to avoid falling through), lifts, sentry robots, computer terminals, and various items which can be searched. Players can run and jump to navigate rooms, but have no weapons so sentry robots must be avoided. If players have already located an appropriate access code, computer terminals can be used to either temporarily disable robots or reset the movable lifts to their initial location. The sentry robots come in two main types; the first are cylindrical looking and can only move back and forth along the platform they are on. Some have predetermined movement patterns while others will attempt to follow the player. Some of these sentry robots also can fire an electrical discharge which is deadly if the player is nearby. The second type of robot that occasionally appears looks like a giant 8 ball; in some rooms it will constantly follow the player, while in others it follows a predetermined course. All of the robots are electrified, so touching any robot will cause the player to lose a life.

The puzzle pieces players need to collect are hidden behind objects in the rooms; depending on the size of the object, searching may take some time (when searching a progress bar is shown indicating how much time remains). Players are still vulnerable while searching, so if sentry robots are nearby players may need to interrupt the search to dodge a robot or use a robot disable code at a terminal. After an object is searched, any items found are shown and the object disappears from the room. While players are in a hallway, the screen displays a computer which can be used to assemble code pieces that have been located together. The pieces may need to be flipped horizontally or vertically to fit, and when all pieces of a section are placed correctly a digit is shown as a result. To open Elvin's control room there are nine digits that need to be found.

Hidden somewhere within the fortress are two code rooms; these rooms have a computer terminal and screen showing a number of squares looking like a checker board. Players can earn bonuses (such as lift reset passwords or robot disable passwords) by solving the puzzle. When the puzzle is started, certain squares flash and a musical note is played; players need to replay all of the notes in ascending order. This can be attempted any number of times, but the sequence becomes longer and more difficult with each attempt.

The game has a time limit; players have only 6 hours to complete the mission, or the game is over. Every time a player loses a life 10 minutes of time is lost; player's have an 'infinite' number of lives, however since the game ends when no more time remains the number of times a player can die will depend on how much time remains on the clock.

The original Commodore 64 version of Impossible Mission is well known for its use of digitized speech created by Electronic Speech Systems (ESS). Speech in the game includes the introduction ("Another visitor...Stay a while! Stay forever!"), occasional announcements when entering a room ("Destroy him, my robots!"), as well as screams when a player falls through gaps in the floor. Due to the success of Impossible Mission, ESS raised their prices after release of the game causing Epyx to no longer work with ESS for speech. The sequel, Impossible Mission II, uses the same ESS speech technology in the Commodore 64 version however it doesn't have any additional speech that isn't found in the original game.

The Atari 7800 North American (NTSC) release of Impossible Mission actually is impossible! Due to a bug in the program, the final puzzle piece in the game cannot be retrieved (it is hidden in a computer terminal which are not searchable). Without this piece there's no way to enter Elvin's control room so the game can't be completed. The European PAL release fixed this bug, however a corrected version was never released for the North American market.

Product catalogs, magazines, flyers, or other documentation Impossible Mission has appeared in.
*Note: If you are unable to see any images in this section, you may have an ad blocker installed that is blocking the thumbnails and/or images. 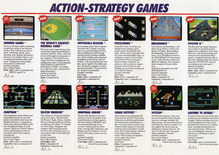