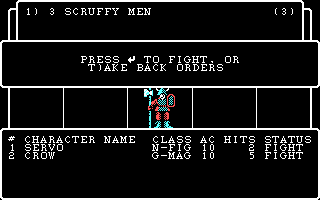 Wizardry: Proving Grounds of the Mad Overlord is a dungeon crawl RPG first released by Sir-Tech in 1981 and is the first game in the Wizardry Series. The initial version was for the Apple II with versions for numerous other systems including the Commodore 64/128, IBM PC, Macintosh, and more following over the next several years. The game is among the first of Dungeons & Dragons style RPG's to be released and is the first to feature color graphics.

After the Mad Overlord Trebor acquired a magical amulet, it is stolen by the evil archmage Werdna. Unsure of how to use the amulet's power, he creates an earthquake which forms a dungeon consisting of ten levels beneath Trebor's castle. Werdna now hides in the lowest level of the dungeon, learning more about the amulet. Meanwhile, Trebor has turned the dungeon into his proving grounds where heros are trained with the ultimate goal of sending them into the lowest dungeon level to defeat Werdna and retrieve the amulet. Players take on the role of such a hero and can build up a team of up to six characters. Each character can be created with a variety of attributes including one of five races (Humans, Elves, Dwarves, Gnomes, and Hobbits), three different alignments (Good, Neutral, or Evil), and four classes (Fighter, Priest, Mage, and Thief). Additional elite classes can be unlocked once players have progressed far enough through the game. It is also possible for characters to change alignment if they continually act contrary to their alignment.

Wizardry uses a simple first-person view of the dungeon; most of the screen consists of text with line graphics used to depict the dungeon. Dungeons are layed out on a 20x20 grid and players will need to make their way through carefully as each dungeon is a maze where numerous traps and monsters await. While the dungeons aren't huge, players will still need to carefully map their way by hand through them; there is no auto-map feature, there are numerous traps, secret doors, and other obstacles. Due to the simple graphics there aren't many landmarks or distinguishing features making many paths and intersections appear the same. To further complicate exploration teleports are located throughout the dungeon which instantly transport the player to another location, and some areas have various spells such as a darkness spell forcing players to wander blindly.

During an encounter with monsters, the dungeon view is replaced by pictures of the monsters for the duration of the battle. Battles are turn based; on each round players select an action for each active character in the party to perform, then the battle plays out and the results are shown. Some battles are random, while others are predetermined and will always occur at the same location. The frequency of random battles may vary as well depending on the area of the dungeon the party is in. Depending on a character's class, different actions are available including fighting (if a character is in the front row), casting various spells (offensive or defensive), parry, use an item, run from a fight, and more. Monsters encountered come in a wide variety as well, each with different strengths and weaknesses. As monsters are defeated, experience is earned allowing party members to increase their statts and become more powerful.

The game automatically saves progress when players are outside the dungeons; Players are unable to save the game while in the dungeon or load a previous state so any characters deaths are permanent. It's possible for remaining party members to return to the surface and revive fallen members, or in the event all members of the party are killed a new party will need to be formed. It is possible to recover the bodies and items of dead characters, however since they will remain at the location of the battle where killed so the new party will typically need to win that same battle before recovering anything.

Completion of Wizardry may be necessary to play the first two sequels, Wizardry II and Wizardry III depending on the version; initial versions of the sequels didn't allow creation of a new party and instead require parties from Wizardry be imported while later revisions added the option of a pregenerated party and the ability to create new characters.