Wizardry: The Return of Werdna - The Fourth Scenario 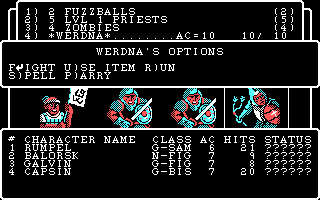 Wizardry: The Return of Werdna - The Fourth Scenario (more commonly known simply as Wizardy IV) is a dungeon crawl style RPG first released by Sir-Tech in 1987. The fourth entry in the Wizardry Series, the game reverses the roles from previous entries by casting players as Werdna, the evil wizard from the first game. The goal is to escape from the bottom of the 10 level dungeon where Werdna is imprisoned and reclaim the amulet that was stolen.

The game begins at the bottom of a dungeon which consists of ten levels; This is where Werdna was imprisoned following defeat in the first Wizardry game and where players must escape from. Most of Werdna's powers are depleted and, to escape successfully, will need to be restored. The dungeon and all of its monsters and traps were originally created as a means of keeping would be adventurers away; now, they form barriers to keep Werdna trapped.

Wizardry IV uses the same style of simple wireframe graphics as the previous games. Gameplay remains, for the most part, the same as well. Throughout the game simple wireframe graphics present a first person view of the dungeon as players explore. Battles with opponents are again turn based allowing the selection of a variety of spells, attacks, or defenses on each turn. Building parties is slightly different in this outing; players now have various monsters in the party and the opponents are the heroes from the first three Wizardry games. On each level of the dungeon there is a pentagram hidden somewhere; at the pentagrams, players can summon monsters, restore health and spellcasting abilities, and the first time each pentagram is visited Werdna will increase in strength.

Wizardry IV is known for being an extremely difficult game (and was advertised as 'For Expert Players Only'). Not only are the foes encountered more difficult to defeat, experience with the previous Wizardy games was absolutely necessary. There is no tutorial or training area in the game where players can learn about the available spells and character abilities. Without this knowledge, solving some of the puzzles could be nearly impossible. Additionallly, players don't earn experience points for defeating opponents; the only way to increase in strength is at the pentagrams which can only be done once on each level so when faced with particularly difficult opponents it's not possible to first level up by defeating easier opponents. As with previous games there is no auto map feature so players need to manually track their progress through the mazes; the mazes this time around are more complex and feature more traps than the prior games which include teleporters, pits, rotate floors, a minefield, hidden doors, and more.

Wizardry IV was one of Sir-Tech's worst selling games. While initially intended for release in 1984, the game was finally released in 1987; by that time, the graphics and sound in the game (which were still essentially the same as the prior Wizardry games) appeared rather dated, even when compared with other similar RPG's of the era. The high level of difficulty was also a factor as it made the game not particularly fun for many players.