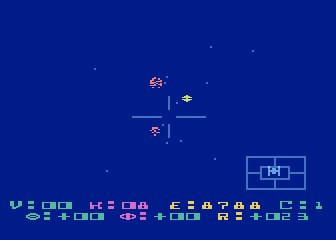 Star Raiders is a first-person space combat simulator by Atari first released for Atari 8-bit computers in 1979 and later ported to the Atari 2600, Atari 5200, and Atari ST. In the game players need to save the galaxy by destroying all of the enemy Zylon fighters that are attacking.

The goal in Star Raiders is to locate and destroy all Zylon fighters (renamed Krylons for the Atari 2600 release) while protecting friendly starbases. To do so, players will need to navigate their ship to the various sectors in the galaxy where the fighters are located and defeat them in battle. During the game players can switch their view between three perspectives: a first person perspective view from the ship (used for battles, docking with starbases, and navigating hyperspace. Forward and aft views are possible.), a third person long range scan of the current sector the ship is in (this can be useful for locating enemy fighters or a starbase), and a galactic chart which shows the entire galaxy broken up into sectors and indicates where enemy fighters are located along with the location of starbases. From the galactic chart view, players can also select a destination and enter hyperspace to arrive there quickly (on all but the novice level, players will need to navigate by keeping cross-hairs aligned or the ship will be off course and possibly miss the desired destination).

The player's ship has various types of equipment which can be utilized via either a keyboard or touchpad depending on the version of the game. Shields are available to protect against attacks, photon torpedoes for attacking opponents, a sub-space radio, and navigation equipment.

Throughout the game players will encounter three types of Zylon spacecraft:

During battle, if players are hit by enemy fire the ship will take on damage; following too much damage, some of the ship's equipment will become limited or completely destroyed (for example, players can lose hyperspace ability if engines are destroyed, lose navigation ability, lose partial photon power, or lose shields). As the game progresses the Zylon's will be attempting to destroy friendly starbases; to do so, they will first surround one which will display a warning. Once surrounded, players have a limited time to destroy at least some of the Zylons before the starbase is destroyed. As long as all starbases aren't destroyed players can still win the game (albeit only with a lower ranking), but the game is over once the last starbase is gone. As a last resort, players can also destroy a starbase themselves if they are unable to defend it from attack; doing so results in slightly less performance penalty than allowing Zylons to destroy it as debris will then be unavailable for Zylons to use.

The Zylon attack in Star Raiders continues in real time; whether players are travelling through hyperspace, viewing the galactic chart, or engaged in battle, the Zylons are on the move attempting to surround and destroy starbases. Especially on higher difficulty levels, this can add an additional challenge as players may need to carefully plan their strategy to avoid wasting too much time in hyperspace or fighting. The player's ship also has a limited energy reserve that is depleted by flight and hyperspace, use of shields, and by being hit by enemy fire. If the energy runs out the game is over; player's can replenish energy (as well as repair damaged equipment) by docking at a starbase. Additionally, if players are hit by enemy fire when the shields are down (or destroyed), the game is over.

Unlike many action games of the era, Star Raiders didn't continue on indefinitely and it was possible to win by successfully destroying all of the Zylon fighters. There is no score, however when the game ended (either successfully or unsuccessfully) a rating was provided ranging from Garbage Scow Captain or Galactic Cook all the way up to Star Commander. The rating is based on a number of factors including the skill level selected, the amount of time and energy used, whether or not any starbases were destroyed, and whether the player successfully destroyed all Zylons.

Due to the limited controls available, the Atari 2600 version of Star Raiders came packaged with the Video Touch Pad, a 12 button keypad designed to replace the keyboard used in the original version of the game. The touch pad was designed to support overlays over the keys allowing it to potentially be used by other games, however Star Raiders ended up being the only to game to support it.

Product catalogs, magazines, flyers, or other documentation Star Raiders has appeared in.
*Note: If you are unable to see any images in this section, you may have an ad blocker installed that is blocking the thumbnails and/or images.