Police Quest: In Pursuit of the Death Angel

Police Quest: In Pursuit of the Death Angel is a 3D animated adventure game first released by Sierra On-Line in 1987 and is the first game in the Police Quest Series. Utilizing Sierra's AGI (Adventure Game Interpreter) game engine, the game follows officer Sonny Bonds of the Lytton Police Department as he starts out with traffic duty and eventually tracks down a drug lord known as "The Death Angel".

Police Quest takes place in the Lytton, a fictional town in California; player's take on the role of Sonny Bonds, an office for the Lytton Police Department assigned to traffic duty. The game begins at the start of a shift with Sergeant Dooley warning the staff of local teenagers using cocaine getting out of hand. During his patrols, Bonds will have to investigate a car crash, deal with unruly bikers and a drunk driver, and find clues that lead to further drug investigations. As the story progresses, Bonds is promoted and eventually identifies the drug lord behind everything: Jess Bains, aka "The Death Angel". To complete the game, players will need to find a way to arrest and convict Bains for the myriad crimes he's committed.

Gameplay in Police Quest is very similar to other adventure games released by Sierra; players can interact with the game by moving their character around the 3D environment and typing commands to perform actions, talk with people, and more. The game's story is advanced as players solve puzzles often by acquiring items for use later, locating clues, completing proper police protocol, or talking with other characters. Unlike many other adventure games of this style, Police Quest has a lot of realistic, real life inspired tasks that need to be completed and often requires players to adhere to police rules and procedures; this covers a variety of actions throughout the game including following arrest procedures, booking suspects, securing crime scenes, and handling of police equipment such as firearms. Failure to follow the rules will typically end the game causing players to have to restore a previously saved game.

In 1992 Sierra released an updated version also titled Police Quest: In Pursuit of the Death Angel. Similar to other enhanced remakes Sierra made, the update uses Sierra's newer SCI game engine and included 256 color MCGA/VGA graphics, a new stereo soundtrack with support for common sound boards, and uses their point-and-click interface instead of typed commands (similar to the interface first introduced with King's Quest V). The storyline and most of the puzzles remain the same as the original version.

Product catalogs, magazines, flyers, or other documentation Police Quest: In Pursuit of the Death Angel has appeared in.
*Note: If you are unable to see any images in this section, you may have an ad blocker installed that is blocking the thumbnails and/or images. 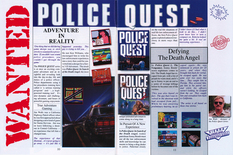