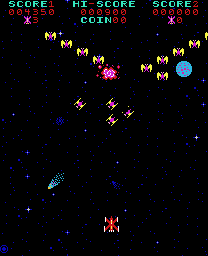 Phoenix is an outer-space shooter first released in arcades in 1980 and later ported to the Atari 2600 in 1982. Similar to games such as Space Invaders and Galaxian, players control a spaceship with the goal of shooting the various attacking enemies to earn points. Phoenix expands on the concept by having 5 distinct rounds of play which ends with the Phoenix mothership.

In Phoenix players control a spaceship which can move horizontally along the bottom of the screen; The goal is to shoot the varied bird-like enemies to earn as many points as possible. Enemies appear in formation along the top part of the screen and will fire missiles at the player and also dive down and attempt to crash into the player. To destroy opponents the player's ship is equipped with the ability to fire shots upwards. For protection, a shield is also available which will block enemy fire and destroy any opponents that crash into it. The shield has a limitation, however; While active, players are unable to move or fire. Each time it's activated, the shield will remain for about 5 seconds.

After all 5 rounds are completed, the pattern repeats with an increased level of difficulty. Players begin the game with a limited number of ships (the exact number may vary depending on the difficulty setting selected) and the game ends when all reserve ships have been lost.

Product catalogs, magazines, flyers, or other documentation Phoenix has appeared in.
*Note: If you are unable to see any images in this section, you may have an ad blocker installed that is blocking the thumbnails and/or images.