Links: The Challenge of Golf 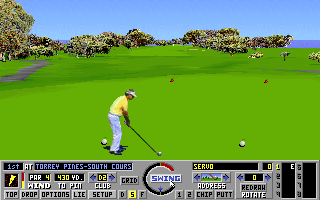 Links: The Challenge of Golf is a golf simulation from Access Software released in 1990. The game features realistic physics and graphics to recreate the game of golf accurately. Sound effects are digitized and the game accurately recreates the courses including digitized photos of actual trees and other objects. The game uses controls that are very common in golf games; a swing meter is used to indicate the strength of the hit and its accuracy - Clicking starts the swing, a second click indicates the strength of the shot, and the final click indicates how accurate the shot is (if the timing is too early or too late the shot will either hook or slice). The game featured the ability to take mulligans, adjust the golfers stance, customize the clubs the golfer had for each round, a grid to show the hills more clearly, an overhead view of the hole/course, and a driving range or practice putting green.

The game includes one championship course, Torrey Pines, located in San Diego. Additional courses were also available separately. Unlike many golf games of the era, Links did not include a course editor; this was due to the level of detail and complexity of the data utilized for the Links courses.

The PC version exclusively used 256 color MCGA/VGA graphics, a feature that was not yet common for PC golf games and gave Links a more photo realistic look than its competitors. While the game would work on slower computers, a faster computer was desirable to keep the rendering time for each view to a reasonable speed. The PC version utilized Access Software's Realsound technology to playback digitized sounds through the PC speaker, or one of several supported sound cards could be used. Links was also later released for the Amiga and Sega CD.

Product catalogs, magazines, flyers, or other documentation Links: The Challenge of Golf has appeared in.
*Note: If you are unable to see any images in this section, you may have an ad blocker installed that is blocking the thumbnails and/or images.