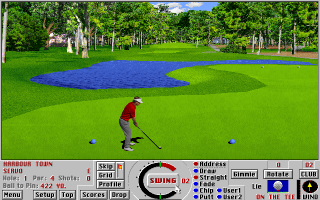 IBM version of Links 386 Pro
Links 386 Pro is a golf simulation developed by Access Software in 1992; The game is a follow up to Links: The Challenge of Golf. Like its predecessor, Links 386 Pro features realistic physics, detailed graphics, and digitized sound effects to accurately recreate the game of golf. It maintains the features of the original links while additionally adding new features and enhanced graphics and sound.

The game uses controls that are very common in golf games; a swing meter is used to indicate the strength of the hit and its accuracy - Clicking starts the swing, a second click indicates the strength of the shot, and the final click indicates how accurate the shot is (if the timing is too early or too late the shot will either hook or slice). Players may also adjust their stance or the face of the club as well in order to intentionally add spin to the ball for a given shot.

New features added to Links 386 Pro include higher resolutions graphics, the addition of textures to the landscapes for a more realistic look, customizable golfers including the ability to choose between male or female and choose shirt colors, new ways to custom the view such as split screens, improved physics, the ability to record a game, and more. The PC version of Links 386 Pro exclusively uses Super VGA graphics (and is also one of the first PC games to support the format). The games uses a resolution of 640x400 (as opposed to the 320x200 used by the original Links) to provide more detailed, photo realistic images. As the game's title implies, a system with at least an 80386 processor was required in order to run the game, a requirement that wasn't yet common at the time.

Links 386 Pro included one course, Harbour Town Golf Links located on Hilton Head Island in South Carolina, with the game. Other championship courses were available seperately. In addition to the add-on courses which included high resolution graphics specifically for Links 386 Pro, the game also came with a course converter which would convert data from the original Links courses for use; naturally the graphical detail wasn't as sharp as with native Links 386 courses, however it allowed players to be able to use any courses they may have previously purchased. Many of the courses originally released for Links were also sold in updated versions which included the new high resolution data. As with the original Links, Links 386 Pro did not include a course editor, a feature that was common to many golf simulations at the time; This was due to the complexity of the data utilized for the courses.

In 1995 Access released an updated version of the game, called Links 386 CD, which utilized the additional storage space of CD-ROM's to include a few new features such as pre-rendered flyby's with audio commentary.

Product catalogs, magazines, flyers, or other documentation Links 386 Pro has appeared in.
*Note: If you are unable to see any images in this section, you may have an ad blocker installed that is blocking the thumbnails and/or images.