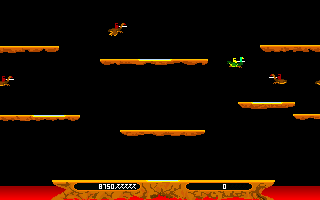 Joust VGA game in progress
Joust VGA is an unofficial clone of the arcade game Joust. The game utilizes VGA graphics to closely mimic the look of the original arcade version and features similar gameplay.

In the game, one or two players control a knight riding an osterich on a screen containing several platforms; the goal is to defat all of the enemy buzzard riders in order to proceed to the next, more difficult level. To defeat a buzzard rider, players will need to joust with them by guiding their osterich into the buzzard. The winner of the joust is determined by whomever's lance is higher at the time of impact. Joust VGA includes all of the elements found in the original game including three different types of enemy buzzard riders, eggs that will hatch, the pterodactyl, lava along the bottom left/right of the screen, and the lava troll.