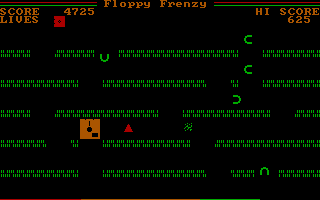 Floppy Frenzy for the IBM PC
Floppy Frenzy is an action game released by Windmill Software in 1982 for the IBM PC. In the game, players control a floppy disk with the goal of avoid the dangers that can destroy a disk such as magnets and dust.

The game screen in Floppy Frenzy consists of a maze with numerous hazards (magnets monsters and dustmen) running about. Players control a floppy disk with the goal of eliminating the hazards to earn points and move on to the next level. In order to destroy one of the magnet monsters, players need to leave a trap behind. If a magnet falls into the trap, it will temporarily turn into a harmless bar magnet allowing players to catch and destroy it (after time runs out, it will return to it's normal magnet monster form). Dustmen appear on the more difficult levels; the traps will turn the dust into harmless particles allowing them to be swept away (Players have less time to destroy dust compared to the magnets).

Points are earned each time a magnet or dust is destroyed; bonus points are awarded for each level completed. Players start the game with 3 floppy disks; a bonus life is earned for destroying all of the dustmen in a given maze. 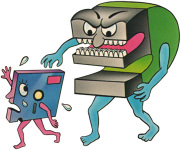