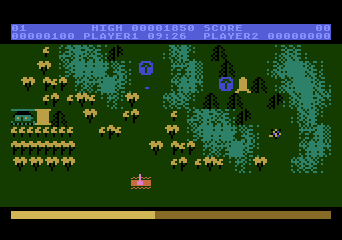 Countermeasure for the Atari 5200
Countermeasure is an action game released for the Atari 5200 by Atari in 1982. In the game, terrorists have taken over several missile silos and are threatening a launch; Players need to stop the launch either be destroying all of the missiles or by locating a secret code to disable them. Either way, there is a 10 minute time limit for players to complete the goal or the missiles will be launched.

In Countermeasure players control a tank with a top down view of vertically scrolling terrain. The terrain consists of forests, flowers, open areas, buildings, and more; while the tanks can travel over any type of terrain, its speed will vary greatly (e.g. forests will cause the tank to move much slower than an open field). Scattered throughout the area are the missile silos along with various defenses the terrorists also control. To complete a level, players need to safely navigate past all of the defenses and either destroy or disable the missiles.

If players are going to attempt to disarm the missiles, a 3 letter fail-safe code is needed (it will consist of any combination of the letters L, E, and O). Each time the player docks at a supply depot, one letter in the code is given in the correct position (the letter given is random, so it's possible the game will provide the same clue more than once). When ready to guess, players can dock at any missile silo and enter the war room. Here, players have a very limited amount of time to enter the complete code before the missiles reach their destination (the top row on the Atari 5200 controller is used for entering letters; a keypad overlay included with the game shows which letter is mapped to which button). Whether this section is won or lost, the game will proceed to the next, more difficult level; success will also earn the player an additional 10,000 bonus points and an extra life.

While attempting their goal, players will need to watch their tank's fuel level and the time limit; if fuel runs out, the tank is destroyed (fuel can be replenished by docking at a supply depot) and if time runs out players will need to guess the fail-safe code whether they have found enough clues or not.

There are several types of defenses players will need to either shoot or avoid. If the player's tank is hit either by enemy fire or crashes directly into one of the opponents, a life is lost. Defenses encountered are as follows: The pillboxes appear on all levels of the game while the tanks, jeeps, and cruise missiles only appear on later levels (how soon they appear and how aggressive they are depends on the skill level selected). Anything that is destroyed leaves behind a pile of debris; the debris is safe to navigate over, however it greatly reduces the speed of the tank.