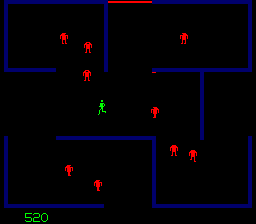 Arcade version of Berzerk
Berzerk is an action game developed by Stern Electronics and first released in arcades in 1980; it was later ported to the Atari 2600, Atari 5200, and Vectrex (A version for Atari 8-bit computers which was identical to the Atari 5200 version was developed, however it was never released). In the game players are trapped in a maze-like building and have to navigate through while destroying the numerous robots. The arcade version of Berzerk is one of the first games to use synthesized speech, a feature that made it into the Atari 5200 version but none of the other home console ports (although an unofficial hack of the game was later released for the Atari 2600 which included speech).

In Berzerk, players control a man in a simple maze filled with robots. The goal is to earn as many points as possible by shooting the robots. If the player is shot, touches a robot, or touches one of the walls a life is lost. Along one or more of the four maze outer walls is a door; players can go through the door to reach a different room in the maze. It's not a requirement to shoot all of the robots in a room before leaving, however bonus points are earned for doing so (if the player leaves with 1 or more robots left, the game famously states "Chicken, fight like a robot!"). Each time the player enters a new room, the door they had entered through becomes blocked so players can't go back and must reach an exit on a different wall.

When the game starts, the robots don't move or shoot. As players progress through the maze robots begin moving (slowly at first, then more rapidly) and firing back at the player. The robots have a simple AI and mostly shoot directly at and follow the player; the robots are destroyed if they shoot each other, walk into each other, or touch the walls as well so in rooms with numerous robots it's not uncommon for many of the robots to accidentally destroy each other.

If players remain in a particular room for too long, Evil Otto appears. Evil Otto is a bouncing smiley face and can't be destroyed; the only defense is to escape to a different room. Otto is also able to travel through the walls and will destroy any robots he comes into contact with. Otto moves at the same speed as the player when travelling horizontally but can move faster vertically; if Otto is closing in, players would have a better chance of escaping by avoiding as much vertical movement as possible.

Points are earned in the game for each robot destroyed and a bonus for clearing a room of all robots. A bonus life is earned after a certain amount of points are earned; the number of points required varies depending on the version of the game, the game option selected, or by DIP switch settings in the arcade version. The Atari 2600 version of the additionally includes game variations which affect the difficulty, allow players to destroy Evil Otto (or leave him out entirely), and more.

Product catalogs, magazines, flyers, or other documentation Berzerk has appeared in.
*Note: If you are unable to see any images in this section, you may have an ad blocker installed that is blocking the thumbnails and/or images.

This game has releases with the following standardized packaging styles:
Atari Silver (Stylized)