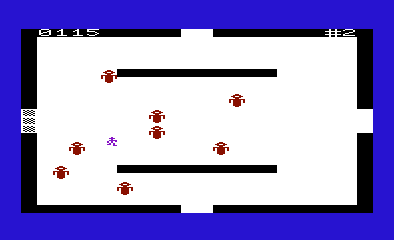 In Amok, players are on a space station being guarded by deadly robots. As in Berzerk, each screen consists of a simple maze filled with robots and an exit located on each of the four outer walls. Players need to avoid touching the walls and robots as well as being shot by a robot. The goal is to earn as many points as possible by destroying the robots before proceeding to the next, tougher screen. It's not necessary to destroy all robots before escaping through one of the exits, however bonus points are earned for doing so. Only three of the four exits are available at a time; the door the player enters a room from will be blocked off so players always need to use a different door to exit. The game includes 9 different skill levels which affect the game speed and how aggressive the robots are.

Points in Amok are earned for destroying robots; Depending on the robot color, points are earned for each robot destroyed as follows: There is an additional award of 1500 points for completely clearing all four rooms (one of each color robot). Amok does not have an equivalent of Berzerk's Evil Otto; the only foe the player will face are the various colored robots.

Product catalogs, magazines, flyers, or other documentation Amok has appeared in.
*Note: If you are unable to see any images in this section, you may have an ad blocker installed that is blocking the thumbnails and/or images.