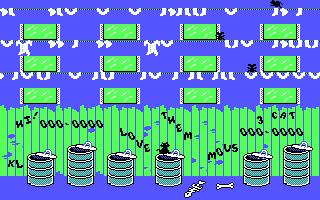 Alley Cat is an action game originally released for Atari 8-bit computers by Synapse Software in 1983 and later ported to the IBM PC/PCjr and in Japan for the PC-88. In the game players control Freddy the Cat who is attempting to reach his love, Felicia, in an apartment complex. To complete this goal players need to guide the small black cat through various scenes and succeed at several tasks.

The game begins in an alley with a fence in front of an apartment building. Several trash cans are scattered about allowing the cat to jump up, climb the fence, and reach windows in the building. From time to time a dog will run by here as well which needs to be avoided or players lose a life. When players successfully climb up to an open window, they can enter it and the room will contain one of several types of challenges:

In many of the rooms there is a sweeping broom that continuously chases the cat; players don't lose a life if the broom catches them, however the broom will attempt to shove the cat out of the window or even into another hazard in the room. The only defense against the broom is to walk on the floor and leave footprints; the broom will then be distracted attempting to clean up the mess.

Once players complete all of the tasks, a female cat will appear in a window. After entering that window, players will need to make their way up a series of platforms (consisting of repeating hearts) to reach the cat. Other cats get in the way and will knock the player back down a level if they come in contact; if players fall off of the bottom of the screen, a life is lost. Gifts will appear from time to time as well which can be used for a short time to eliminate the other cats. If players are successful, the level is complete and the game repeats with increasesd difficulty (there are 30 levels of difficulty in total).

This game has been tagged with the following features:
Copy Protection: Key Disk