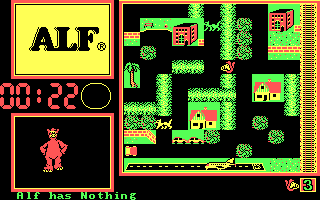 ALF: The First Adventure is an action game loosely inspired by the 1980's t.v. show ALF. It was first released in 1987 by Box Office for Apple II computers and the IBM PC with ports for the Atari ST and Commodore 64 released shortly after. The game somewhat resembles Pac-Man with ALF in a top-down view of a maze attempting to collect cats and lost spaceship parts that are scattered around the town while avoiding Willie Tanner and the dog catcher.

ALF features four levels of maze-like towns with a top-down view. The maps for each town are larger than a single screen, and depending on the town are broken into four or six sections. To complete each town, players need to collect four cats, two spaceship parts, and one key and return them one by one to the garage; if all four towns are completed within the time limit, players win the game. Roaming around the town is Willie Tanner; if he catches ALF, all of the possessions collected so far will be lost and players need to begin again. Also roaming the town is a dog catcher; if ALF is caught, Willie will rescue him but only twice. If ALF is caught a third by the dog catcher a third time, the game is over. The four cats in each town are quick, and ALF will need to chase them down; additionally, ALF can only catch a cat after eating a pizza to build up his strength. When ALF eats a pizza, players have a limited amount of time to catch a cat; a pizza meter appears on the screen and disappears one slice at a time indicating how much time remains. The last obstacle found in the towns are garbage cans. Running into a garbage can doesn't cost a life, however it will temporarily knock ALF down causing some time to be lost and making ALF an easy target for Willie or the dog catcher.