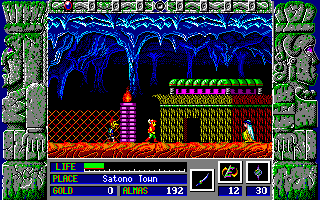 Zeliard is a platform/action RPG first released in Japan by Game Arts for the NEC PC-8801 in 1987 and Sharp X1 in 1988 and later in North America in 1990 by Sierra On-Line for IBM computers. In the game, the kingdom of Zeliard is being destroyed by the evil overlord Jashiin. Players take on the role of Duke Garland with the task of saving the kingdom by locating the Nine Tears of Esmesanti which have been stolen and are scattered throughout the lands.

The story begins with the ancient demon known as Jashiin waking from a 2,000 year slumber. As revenge on the old kings of Zeliard, Jashiin unleashes his wrath by causing sand to rain down continuously for 115 days, turning the kingdom into a desert. Additionally, King Felishika, the current ruler of Zeliard, has a daughter Felicia who is turned to stone. To reverse the curse, magical jewels known as the Nine Tears of Esmesanti must be recovered and returned to Felicia; these have been stolen by Jashiin and hidden in eight caverns with Jashiin himself holding the ninth. The spirits of Zeliard have sent Duke Garland to rescue the lands and save Felicia.

In Zeliard players take on the role of Duke Garland attempting to complete this quest. The game features a side view of the world; gameplay takes place mainly in three types of areas: Above ground areas, the towns, and inside caverns. Most of the towns are at the borders of the caverns although a few are also hidden within. Both towns and above ground areas are safe allowing players to save game progress, talk with other characters to find clues or advance the story, and visit various town buildings. There are several types of buildings players can enter which include shops for players to purchase weapons, armor, and spells, churches to level up, inns to rest and restore energy, banks for saving money, and the local houses where players may be able to talk with characters. Players will need gold to buy items when visiting shops, to pay for stays at the inn, and so on. When in the caverns, certain enemies will leave behind an alma after being destroyed; players can collect the almas and exchange them for gold at the bank (some banks will have more favorable exchange rates than others). Occasionally, almas can be used directly to acquire items from other characters.

The caverns, by contrast, are filled with Jashiin's minions and are dangerous to travel through. Garland will need to defeat numerous enemies that appear throughout the caverns as well as climb and jump through the varied terrain. To help out, Duke Garland is equipped with a shield (for blocking enemy fire), a sword (for attacking close range), and the ability to use magic (for attacking long range). Besides the danger posed by enemy encounters, the caverns themselves can be hazardous at times; deadly terrain (such as sharp spikes), excessive heat and cold, and other dangers exist. Duke Garland has a limited amount of energy; contact with any of these dangers and with enemies or their projectiles will drain it. If Garland completely runs out of energy, he is transported back to the church at the very beginning of the game and will need to re-traverse the caverns to get back to where he left off. As player progress through the game travelling through the caverns a second time becomes easier as any locked doors remain open, the large bosses don't re-appear, smaller enemies are easier to defeat with upgraded weapons, and other shortcuts become available after certain items or skills are acquired. If players are carrying any almas or gold when energy runs out, all of the gold and half of the almas will be lost. To help avoid losing gold, players can make deposits at the banks located in most towns. Players don't have a limited number of lives; each time Garland runs out of energy he will be resurrected at the church.

There are eight caverns in total. At the end of each cavern there is a large boss guarding one of the Nine Tears of Esmesanti with the ninth and final one being held by Jashiin himself. Each cavern has a different layout and theme; the caverns are maze-like, and as the game progresses they become larger and more complex. The game included a map showing each of the caverns, however most of the caverns also have additional obstacles which aren't necessarily visible on the map making it essentially only partially complete. These types of obstacles include invisible air currents which carry Garland to another location, gaps which are just a little too wide to jump over, dangerous items players can't walk across without the right gear, slopes that Garland can slide down but are too slippery toc climb up, and more. Additionally, the caverns are filled with numerous doors; the doors can lead in or out of the caverns, however many simply lead to another part of the cavern. Determining which doors lead where is frequently necessary in order for players to make their way to the end of the cavern successfully (naturally, the map also doesn't indicate where doors will take Duke Garland). Some doors are locked; keys can be found many places including by defeating certain enemies, in treasure chests, or simply sitting on ledges throughout the caverns.

Product catalogs, magazines, flyers, or other documentation Zeliard has appeared in.
*Note: If you are unable to see any images in this section, you may have an ad blocker installed that is blocking the thumbnails and/or images.

This game has been tagged with the following features:
Copy Protection: None