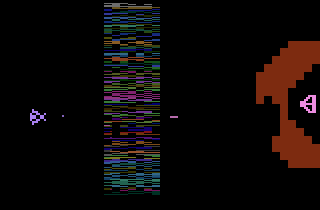 Yars' Revenge is an action game released for the Atari 2600 in 1982. In the game players control the insect-like Yar with the goal of destroying a Qotile laser-base.

The game screen in Yars' Revenge consists of the Qotile laser-base on the right side of the screen behind a protective shield along with a force field near the left side. Players control the Yar, a creature resembling a fly which is able to move anywhere on the screen. The goal is to use a Zorlan Cannon to destroy the Qotile laser-base. To accomplish this goal, players first need to create a gap in the shield so the cannon fire can get through; The Yar can either shoot the shield or run into it to nibble the pieces away one by one. To activate the cannon, players need to touch either the shield or the Qotile which cause the cannon to appear on the far left side of the screen; at this point, the Yar is no longer able to fire its usual shots as the joystick button will now cause the cannon to fire. The cannon follows the vertical position of the Yar, so when fired players need to quickly move out of the way or they will be destroyed. If the cannon successfully hits the Qotile, the game repeats with an increased level of difficulty.

The Qotile isn't completely defenseless; there are two other dangers players will need to avoid during their mission. The first is a destroyer missile which is constantly in pursuit of the Yar. It can't be destroyed, however it is rendered harmless while players are hiding behind the force field. As players are unable to fire while hiding, this defense can only be used temporarily and players eventually need to emerge to complete their goal. The second danger is the Qotile's ability to turn into a swirl; when in this form, players lose a life if the Yar touches it. Once the Qotile transforms into the swirl, it will quickly shoot across the screen (and can even travel straight through the shield). It is possible to shoot the swirl when it's in motion and doing so will earn an extra life, however this can be difficult due to its quick speed.

As was common for Atari 2600 games of the era, there are several game variation settings included which alter the difficulty and speed of the game. The package also included a comic book providing the backstory for the game characters and elements.

Yars' Revenge was originally intended to be a port of the arcade game Star Castle; however, due to limitations of the Atari 2600 hardware an accurate port of the game didn't seem possible. Programmer Howard Scott Warshaw instead made a number of changes to the concept to work better with the hardware's capabilities resulting in a unique game. Yars' Revenge ended up becoming Atari's best selling original game for the Atari 2600. The game's title is a reference to Atari CEO Ray Kassar (Yar is Ray spelled backwards).

Product catalogs, magazines, flyers, or other documentation Yars' Revenge has appeared in.
*Note: If you are unable to see any images in this section, you may have an ad blocker installed that is blocking the thumbnails and/or images. 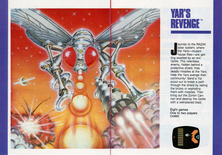