Winnie the Pooh in the Hundred Acre Wood 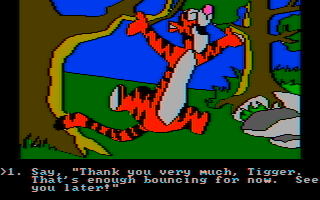 Last night a blustery wind came through the Hundred Acre Wood that picked things up and blew them everywhere! At the start of each game, a series of items is randomly assigned a location on the map; The player's goal is to locate each item and take it back to its rightful owner. Players can pick up only one item at a time; before another item can be carried the current one must either be put down or given to its owner. Players will need to figure out which item belongs to which character, and not all items found will have an owner. The characters encountered in the game include the familiar Winnie the Pooh characters such as Eeyore, Piglet, Kanga and Roo, Winnie the Pooh, Owl, and Christopher Robin. Additionally, from time to time Tigger will appear and bounce the player to a random location on the map. If stuck, players can ask Owl for some clues although he won't tell you everything you need to know.

Unlike other Sierra adventure games which were based on their AGI (Adventure Game Interpreter) engine, Winnie the Pooh in the Hundred Acre Wood doesn't have any animation and doesn't require typing in commands. To interact with the game, players can use the cursor keys to select one of several available options from a menu presented on each screen. Actions include moving North, South, East, or West, picking up/dropping an item, performing an action (such as climbing a tree), and talking with a character. By returning to the starting location and opening a chest players can save their progress to continue the game later. 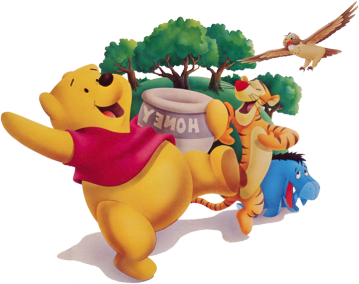 Product catalogs, magazines, flyers, or other documentation Winnie the Pooh in the Hundred Acre Wood has appeared in.
*Note: If you are unable to see any images in this section, you may have an ad blocker installed that is blocking the thumbnails and/or images.