Wacko is an arcade game released in 1983 by Bally Midway. In the game, players control Kapt'n Krooz'r, a green alien in a flying saucer, who is trapped on a planet infested with various monsters. The goal is to clear the screen of all monsters by using a ray gun to shoot them in pairs.

Wacko takes place on a desert-like planet outside a cave (and on some levels inside the cave); the screen remains fixed with players able to navigate freely anywhere on the screen. The game uses a trackball controller for players to move Kapt'n Krooz'r and a joystick to fire a ray gun in four directions. Each level begins with numerous monsters appearing in pairs; to complete the level, players need to use the ray gun to eliminate all monsters. When a monster is shot, it will be temporarily frozen; if they player then shoots that monsters pair, both will be eliminated. If players come into contact with any monsters, a life is lost; the game ends when players have no more lives in reserve.

As the game progresses, additional complications are added to the process. After a few levels, if players shoot two different types of monsters, a mutant is created with the top of one monster and bottom of the other. To eliminate such mutants, players either need to shoot the same two monsters again in order to revert them to the original form, or create two additional mutants of the same type which can then be eliminated in like pairs. Additionally, the monsters can transform into several forms before they are finally eliminated: first large monsters become small flying monsters, small monsters turn into eggs, and eggs turn into bats. On levels where the monsters transform into another type, all monsters must be turned into the next form before any of them can be eliminated or transformed further (e.g. all large monsters must be transformed before any small monsters can be shot). The game adds each transformation one level at a time; once the sequence is completed, the game repeats with a higher level of difficulty.

Wacko featured a unique cabinet where the marquee and control panel are sloped with the left side being about 3 inches higher than the right side. This unusual cabinet design makes it the only game where the control panel is tilted left to right instead of being level. 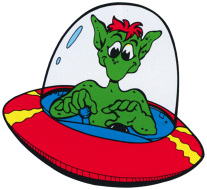 Product catalogs, magazines, flyers, or other documentation Wacko has appeared in.
*Note: If you are unable to see any images in this section, you may have an ad blocker installed that is blocking the thumbnails and/or images.