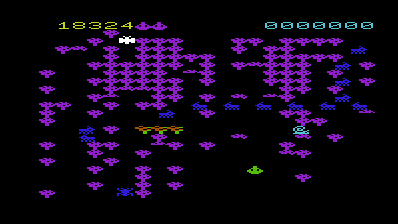 Commodore VIC-20 version of Video Vermin
Video Vermin is an action game for the Commodore Vic-20 released in 1982 by UMI. It is a clone of Centipede and features many similarities in gameplay. In the game players control a gardner who needs to defend a mushroom garden from hoards of attacking insects.

Players control a gardner which can move about the bottom third of the screen which is filled with mushrooms. Similar to Centipede, insects appear at the top of the screen and make there way towards the bottom by moving horizontally and dropping down a level lower when reaching the end of the screen or a mushroom. When all of the insects have been shot by the player, the game moves on to the next, more difficult level. From time to time, a spider moves across the screen either left to right or right to left; it is somewhat unpredicatble and bounces up and down and will occasionally pause in a location. Points are earned for shooting it or it should be avoided. When the number of mushrooms on the screen begins to get low enough, butterflies appear; similar to the fleas in Centipede they drop rapidly from the top of the screen and leave new mushrooms in their place. On later levels the snail will appear; it leaves oil in its path and if the vermin touch any mushrooms after a snail does they will drop rapidly towards the bottom of the screen.

Players begin the game with three gardeners; a life is gardener is lost when it comes in comes in contact with any of the vermin.

The goal of Video Vermin is to earn as many points as possible by shooting the vermin. Points are earned as follows: An extra life is awarded after every 10,000 points earned.