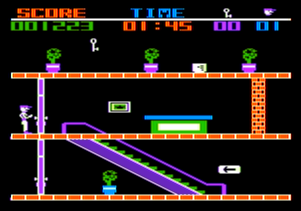 Apple II version of The Heist

The Heist is an action game first published by Micro Fun in 1983. As Graham Crackers, the world's greatest super hero, players have the goal of breaking into a museum to steal all of the artwork in order to locate a micro dot containing top secret inforation. The museum is well guarded and there are numerous security systems that need to be avoided!

The Heist features a side view of the museum with each screen showing three floors. Players guide Graham through each screen with only the ability to jump. Escalators and elevators can help players reach different floors, and there are also gaps in the floor in some rooms (including on the bottom level; if players fall off the bottom of the screen, a life is lost). Many doors appear throughout the museum, all of which are locked; keys can be picked up to unlock the doors after which they'll remain unlocked. Due to the layout of the doors, walls, and gaps in the floor navigating to all of the art that needs to be collected can be puzzle-like and require figuring out a path in order to avoid becoming stuck in dead ends.

Navigating the maze-like museum safely can be tricky; there are a number of security devices that need to be avoided or players will lose a life. These include various types of robots and drones, electric doors, alarms, and more. Any time one of the security hazards is touched a life is lost and the game ends when players have no remaining lives. There are several levels in the game, and players proceed to the next, more difficult level after all of the art on the current level has been collected. There is a time limit for this task, and a life is lost if time runs out.

Product catalogs, magazines, flyers, or other documentation The Heist has appeared in.
*Note: If you are unable to see any images in this section, you may have an ad blocker installed that is blocking the thumbnails and/or images. 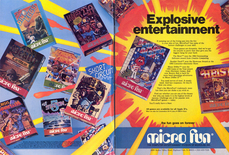