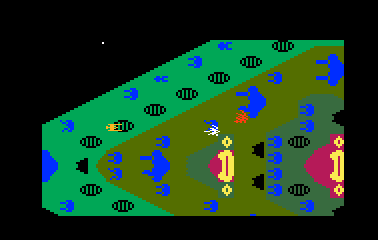 Intellivision version of The Dreadnaught Factor

The Dreadnaught Factor is an action game originally released for the Intellivision in 1983 and later ported to the Atari 5200 and Atari 8-bit computers. The game is a scrolling shooter where players control a ship with the goal of defending the planet Terra from gigantic battleships.

The Dreadnaughts are, of course, well defended; various types of canons, drones, and other obstacles are found guarding each Dreadnaught. The player's spacecraft is equipped with two types of weapons to attack and defend against the Dreadnaughts; the first are laser bolts which can destroy airborne targets, and secondly strontium bombs for destroying both targets on the Dreadnaughts and the energy vents. Enemies and defenses don't re-generate between passes; anything destroyed on one pass of a Dreadnaught remains destroyed on the next pass, so it's to a player's benefit to destroy as much as possible each time to make subsequent passes easier.

The Dreadnaughts appear in five different varieties, each having a different size and shape. The game includes 7 levels of difficulty; the type and number of Dreadnaughts players need defeat will depend on the difficulty selected. In addition to more Dreadnaughts, higher difficulty levels also increase the game speed, the number of engines the Dreadnaugts have (with more engines, the Dreadnaughts are faster providing less time to the player), and the rate at which enemies fire. Points are earned in the game for each target destroyed along with bonus points being awarded for completely destroying a Dreadnaught.

Like many Activision games of the era, players were awarded with a patch for high scores. Players who could destroy an entire Dreadnaught fleet on level 4 or above and sent a photo of the screen to Activision received the Activision Dreadnaught Destroyer patch.

The original Intellivision version of The Dreadnaught Factor scrolled horizontally as players flew past the Dreadnaughts; due to sprite limitations on the Atari 5200 and Atari 8-bit computers, the game was modified to scroll vertically on these systems.