The Adventures of Willy Beamish 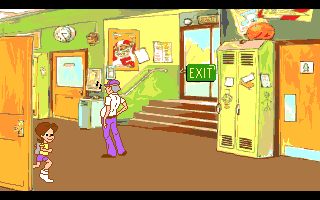 The Adventures of Willy Beamish is a point-and-click adventure game developed by Dynamix. The game was initially released for IBM and Amiga computers in 1991 by Sierra On-Line and later ported to the Sega CD system as well. In the game players take on the role of a 9 year old boy, Willy Beamish, who has a natural tendency for getting himself in trouble. The game features hand drawn graphics and an animation style reminiscent of cartoons. The CD-ROM versions additionally provide full voiceovers throughout.

The Adventures of Willy Beamish takes place in a fictitious called Frumpton. As the game opens Willy Beamish is being sent to detention on the last day of school; during an assembly, his pet frog Horny escaped and removed the principal's toupee. After detention is over (or, if Willy can sneak out...) he arrives home where is father is made aware of bad grades on his report card. Because of the bad grades, Willy loses his video game privelages. Willy has dreams of winning the Nintari (a combination of Nintendo and Atari) competition and he's worried he can't win without practice. To make matters worse, Willy's father loses his job meaning there isn't enough money for him to get to the competition. Meanwhile, elsewhere in the town, there is a pending plumbers strike and a secret plot is revealed that exploits the town's sewer system. To win the game, Willy will need to outsmart the villians and save the town while not getting into trouble (or rather, not getting caught). As a young boy Willy will still need to do his chores, such as walking the dog or keeping an eye on his younger sister, as well as deal with other people that can cause trouble for him including his family, school teachers, a school bully, and police officers. Willy also has several friends who help out throughout the game.

The game uses an entirely point and click interface; players have available several different icons allowing various actions to be performed such as walking, talking with characters, using items, picking up items, opening doors, and so on. To progress through the game players will need to solve a variety of puzzles and avoid getting in too much trouble. In some parts of the game it is possible to take multiple paths; for example, at the start of the game Willy has the option of attempting to sneak out of detention or simply wait until it is over. Some puzzles are unavoidable, however, and players can become stuck and may need to backtrack if Willy doesn't acquire certain items.

Throughout the game there is a Trouble-O-meter; this looks like a thermometer with a mercury level initially in the middle. The bottom is labeled "Good Boy" and the top "Cadet School". If an action Willy performs gets him in trouble or annoys his parents, the level goes up; likewise actions that please his parents make the level go down. If the mercury level reaches the top then Willy is sent to cadet school and the game is over.

Product catalogs, magazines, flyers, or other documentation The Adventures of Willy Beamish has appeared in.
*Note: If you are unable to see any images in this section, you may have an ad blocker installed that is blocking the thumbnails and/or images.