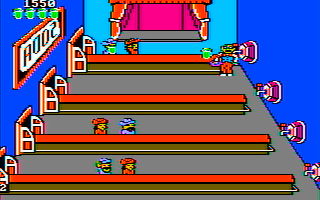 IBM PC version of Tapper
Tapper (also known as Root Beer Tapper) is an action game originally released in arcades by Bally Midway in December, 1983 and later ported to numerous home computers and game consoles. In the game players control a bartender who has to serve numerous, thirsty customers before they become angry.

In Tapper, the game screen consists of four bars; players control the bartender who can move from bar to bar. Customers randomly appear at one end of each bar and slowly walk towards the other end. Players need to serve each of the customers by first pouring a beer from the tap and then flinging it across the bar. If the customer is not currently drinking and is not distracted, he or she will grab the beer and be pushed backwards slightly. If the customer is pushed back far enough, he will disappear from the screen; otherwise after a pause to drink he'll begin heading towards the other end of the bar again. The goal for each level is to push all of the customers off of the screen. If a customer manages to reach the end of the bar, he'll grab the bartender and throw him down the bar (causing the player to lose a life). Similarly, if the player flings a beer that isn't caught by a customer it will fall off of the end of the bar and a life is lost. Each time a customer finishes drinking a beer, he'll send the empty back towards the bartender. Players need to catch all of the empty mugs before they fall off of the bar otherwise they break and a life is lost. The game ends when players have no more lives remaining.

From time to time a customer will leave a tip somewhere along the bar; if the bartender collects the tip, entertainers (such as dancing cheerleaders, etc.) will appear on the stage for a short time. When this happens, some of the customers will be distracted and pause to watch the show. While they are watching, they won't catch any beers flung at them however they are also not moving closer to the bartender which can provide some extra time for the player to give drinks to the fewer customers who aren't watching.

Tapper features four different locations, each one including several levels to complete. The locations are: If the player can complete all of the above levels, the game repeats but with a higher level of difficulty. Each level also increases in difficulty by having customers appear faster, customers are pushed back shorter distances, the maximum number of customers at each bar increases, and customers walk along the bar faster.

Between each of the locations there is a challenge round. In this segment, the player is presented a bar with six beers on it. A masked villian shakes 5 of the beers and then shuffles them around in a shell game fashion. If the player can then select the beer that isn't shaken, bonus points are awarded (otherwise the beer explodes when opened).

There have been several variations of Tapper released; in these variations the Budweiser branding is removed to avoid the appearance of advertising alcohol to minors. Variations include Root Beer Tapper which was released in arcades and the replacement of the Budweiser logo with a Mountain Dew logo in many of the home versions. The difference was entirely cosmetic and the gameplay otherwise remained the same.

Product catalogs, magazines, flyers, or other documentation Tapper has appeared in.
*Note: If you are unable to see any images in this section, you may have an ad blocker installed that is blocking the thumbnails and/or images.