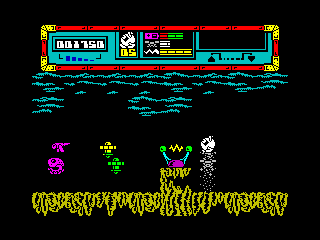 StarQuake is an action/platform game initially published by Bubble Bus Software for the ZX Spectrum in 1985 and later ported to numerous other systems. In the game, a rogue planet has appeared from a black hole and it has an unstable core; if the core is not stabilized in a given time limit, it will implode which could cause a chain reaction that destroys the universe! Players have the goal of locating and retrieving all of the parts to rebuild the core which are scattered throughout the planet.

The planet in StarQuake consists of 255 different screens; scattered throughout these screens are nine parts which will need to be located in order to rebuild the planet core. Players control a being known as BLOB (Bio-Logically Operated Being); the BLOB can carry up to four items at a time so players will need to locate the core and return to it several times to complete the quest. Some items also won't be immediately helpful; located throughout the world are Cheops Pyramids which can be used to exchange the useless parts for something that's needed.

The BLOB can move about the environment primarily by walking left or right. Hover platforms can be used to fly, however there are some limitations; while flying, players can't pick up objects, use teleporters, enter a Cheops Pyramid, or utilize the elevator tubes. Also, the hover platforms can only land at the docking stations that are found in some of the rooms on the planet. Since players can't board or disembark at will, it can be necessary to use the hover platforms strategically to make getting past tough obstacles easier while walking when possible to avoid missing important items. The BLOB can also create temporary hover platforms; these don't move and only last for a short time, however by repeatedly creating them players can effectively lift themselves up into the air to reach new platforms or even the next screen. Lastly, the BLOB has a laser to shoot the numerous (and deadly!) creatures that inhabit the planet. It can only fire to the left or right, however.

Many of the BLOB's capabilities have limits; at the top of the screen there is display indicating how much energy remains, the power remaining to create platforms, and the remaining laser power. If the platform or laser power runs out, players simply won't be able to use these items. If the main energy runs out, a life is lost. All of these can be replenished by picking up certain items.

The world map in StarQuake remains the same for each game as do the teleportation codes, however the types of pieces required to repair the core as well as their location is randomized.