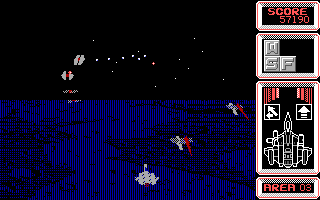 IBM PS/2 (MCGA) version of Silpheed
Silpheed is an action game developed by Game Arts and originally released in 1986. It was initially available in Japan for the PC-8801 computer and later was ported to other systems including releases in the US by Sierra On-Line in 1988. The game is an arcade style shooter featuring 20 levels of gameplay.

The the year 3032, and abandoned alien spacecraft is discovered beyond Pluto. By analyzing the craft, Earth's scientists are able to recreate its technology allowing for the colonization of numerous worlds; this gave rise to the Milky Way Union. An outlaw known as Xacalite has been raiding Union planets; additionally, Xacalite has seized GLOIRE, a large battleship, with plans to take over the Union. It has been determined by the supercomputer Yggdrassil that the best plan for defeating Xacalite is to fly a new prototype ship, the SA-08 Silpheed, into battle to get past Xacalite's fighters and finally destroy GLOIRE.

Silpheed uses 3-D polygons to render the graphics and is viewed from behind the ship with a tilted perspective that gives a sense of depth. Players can move Silpheed around the bottom two thirds of the screen while it flies continually forward. During each of 20 areas in the game, various types of enemies continually attack. Enemy ships can be shot with the Silpheed's weapons, while some additional obstacles need to be dodged.

The Silpheed is equipped with shields to protect against attacks and collisions; each time the player is hit, the shields deplete a little. Once the shield is gone, the Silpheed will sustain damage from additional collisions; if hit three times without shields, the ship explodes and the game is over.

At the beginning of each battle area (except for Area 1), the player can select two weapons, one for the left side of the ship and one for the right. Initially, only the forward beam weapon is available; After every 50,000 points earned, a new weapon will be available for either the left or right side.

The capabilities of the Silpheed can be improved by collecting power ups. In any type of battle area except for Above Planets, red, asteroid like Golans will appear from time to time; if shot several times, they release a power up which can be collected. The following power ups appear in the game:

Silpheed is often noted for its extensive, high quality soundtrack. In the PC version, various sound cards are supported for the soundtrack. The specific cards that are supported vary depending on the version of the game — see the technical specs page for a listing of sound hardware supported. Sounds effects, however, are always played through the PC's internal speaker making them somewhat limited. The exception to this is in Version 3.2; this updated version of the game was bundled with the IBM PS/1 Audio Card and added digitized sound effects support specifically for this card.

Product catalogs, magazines, flyers, or other documentation Silpheed has appeared in.
*Note: If you are unable to see any images in this section, you may have an ad blocker installed that is blocking the thumbnails and/or images.