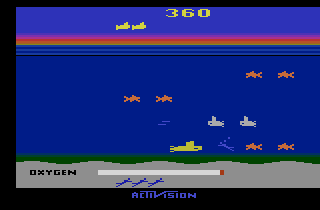 Seaquest for the Atari 2600

Seaquest is an action game released by Activision for the Atari 2600 in 1983. In the game players control a submarine with the goal of earning as many points as possible by picking up divers who are hunting for treasure!

A number of divers are searching for treasures in the ocean; having found what they are looking for, it's time to pick them up and return to the surface! The goal is to retrieve as many treasure divers as possible while avoiding the numerous sharks and enemy subs. The divers as well as the opponents can appear from either the left or right side of the screen and move horizontally towards the other side; players control a submarine which can move anywhere on the screen. The sub can carry up to six divers at a time; once six divers are picked up, players can guide the submarine to the surface to drop them off and earn points. While it is possible to surface with less than six divers on board, doing so will lose one of the divers; surfacing with no divers on board will cause the sub to explode and cost a life. Oxygen is limited, so players will need to surface eventually for it to be restored; allowing the oxygen to completely run out will destroy the sub. To help out, the submarine is equipped with an unlimited number of torpedoes; these can be used to shoot the numerous sharks and enemy subs. Enemies usually appear in groups; while sharks might not fire torpedoes at you like the enemy submarines, they move up and down in a wave-like pattern making them harder to avoid. As the game progresses it becomes more difficult by increasing in speed and having more opponents appear at once.

Similar to many Activision games from the era, Seaquest awarded players with a patch for high scores. If players could earn at least 50,000 points and sent a photo of the screen to Activision, they would receive the “Sub Club” patch.

Product catalogs, magazines, flyers, or other documentation Seaquest has appeared in.
*Note: If you are unable to see any images in this section, you may have an ad blocker installed that is blocking the thumbnails and/or images. 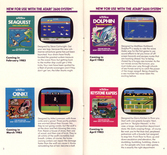