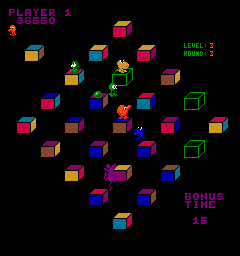 Q*bert's Qubes is an action game originally released in arcades by Mylstar Electronics (formerly Gottlieb), and later ported to the Atari 2600 and ColecoVision. It is the sequel to Q*bert and features similar gameplay while expanding on the original concept. As in the previous game, players control the orange Q*bert with the goal of changing the cubes on the screen to match a target color while avoiding the many enemies which are in pursuit.

The game screen consists of 25 cubes with the sides made up of either 2 or 3 different colors and a target cube shown in the upper left. The goal is to form a straight line of cubes which match the target cube colors on all visible sides (not just the top face as in the original game); initially, only one row is needed while on later levels multiple rows may be required. Each time Q*bert jumps to a cube, the previous cube will rotate in the same direction Q*bert jumped; by jumping (repeatedly if necessary) in the correct direction players can eventually rotate the cube to match the target. On early levels in the game once a cube reaches the target colors it will remain locked in place so players can't accidentally undo their work; on later levels this isn't the case.

To make the game more challenging, there are, of course, a variety of creatures which are constantly pursuing Q*bert. The creatures in Q*bert's Qubes appear in a variety of types and in different colors; Similar to the first game, Q*bert can safely touch most characters or objects that are green while contact with other creatures will cost a life. Some of the green objects provide bonuses: If Q*bert catches Sheldon the Turtle, enemies will temporarily be slowed down; catching the green ball will temporarily freeze enemies completely. Other green creatures called Shoobops will also flip the cubs different directions as they make their way across the playfield potentially causing players to have to reorient completed cubes back into the proper colors. The most common creature to appear is the Meltniks; contact with a Meltnik regardless of color will cost a life. If Meltniks land on a cube where the top face is the same color as the Meltnik, it will melt offering an opportunity for Q*bert to escape. While the original Q*bert had Coily the snake, Q*bert's Qubes introduces a new opponent, Rat-a-Tat-Tat the giant rat. In a similar fashion to Coily, when the purple ball appears it will eventually land at the edge of the playfield and the rat hatches out and begins chasing the player. Rat-a-Tat-Tat can be eliminated with careful timing; if it lands on a cube while it is still rotating to change color (i.e. shortly after the player jumps off of a cube), it will lose balance and fall off. Unlike Q*bert, there are no discs on the sides of the playfield which can carry players to safety; Players need to remain in the playfield as jumping off any of the sides will cost a life.

Every fourth round in the game is a bonus round. In this round, Q*bert remains in one place and can rotate a single cube beneath him. The goal is to match the cube to a target after which Q*bert moves on to the next cube. The bonus round has a time limit and points are awarded for each cube that is matched during this time.

As the game progresses, the difficulty increases by having more creatures appear, the game moves faster, more matching rows are required to complete a round, cubes no longer lock in place, and fewer bonuses appear.