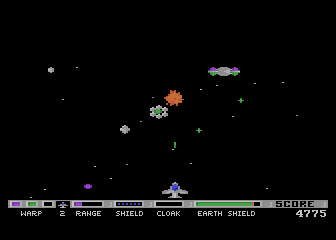 While exploring a far-off region of space, your best friend's starship is ambushed! From this encounter, players learn that an invasion force known as the Planet Smashers are heading to Earth; the goal of the game is to prevent any alien ships from reaching the planet in order to save it!

The game screen in Planet Smashers is a vertically scrolling starfield; the player controls an airplane-like ship which can move around the bottom third of the screen. Various types of aliens appear at the top of the screen and attempt to make it past the player's ship at the bottom. The player's goal is to destroy attacking ships before they reach the bottom of the screen; the Earth has a shield, and any aliens that make it past the player attack and deplete the shield. If the Earth's shield is destroyed, the game is over. The player's ship also has a limited shield capacity — if it is depleted, a life is lost and the game also ends if player's have no more lives remaining.