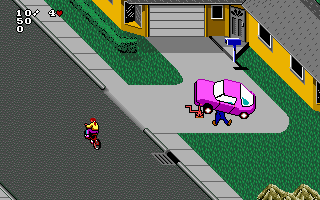 Paperboy 2 is an action game first released in 1991 for numerous home computer systems and game consoles. It is the sequel to Paperboy and features similar gameplay while adding some new features to the original concept. As in the first game, players control a paperboy (or papergirl) riding a bike through a suburban town with the goal of delivering papers to all of the customers. Numerous obstacles are in the way, from cars on the road to unfriendly house owners. Unlike the original game, Paperboy 2 is not based on an arcade game and was instead released only for home systems.

In Paperboy 2, the game screen consists of a suburban road with numerous houses (unlike the original Paperboy, houses can appear on both sides of the road). Players need to guide their paperboy or papergirl around the numerous obstacles while throwing newspapers into the mailboxes of customers. If players fail to deliver a paper to a customer, that house will no longer be a customer on the next day (level); if all customers are lost, the game is over. Additional customers can be gained as well for a perfect delivery run. The number of papers players have available to throw is limited; additional papers can be acquired by picking up the stacks that are lying on the ground throughout the game.

Obstacles appear in numerous forms and include some that were found in the first game and many new ones. Obstacles to overcome include grates in the road, fences, rolling tires, cars, dogs, lawnmowers, and even some ghosts and gargoyles from haunted houses. Crashing into any of the obstacles will cause players to lose a life. While many obstacles must simply be avoided, others can be stopped by hitting them with a paper (for example, a rolling tire stops rolling if it's hit). A few bonuses can be earned as well by throwing newspapers, such as stopping a robbery and halting a runaway baby carriage.

Each level in the game represents a different day of the week; at the end of each level is a bonus obstacle course where points are awarded for hitting targets with newspapers and performing stunts (crashing in this part of the game doesn't cost a life). After the day is completed, a map highlights which houses are customers and which ones aren't. As the days progress, the game becomes harder by introducing more obstacles and faster moving ones as well.